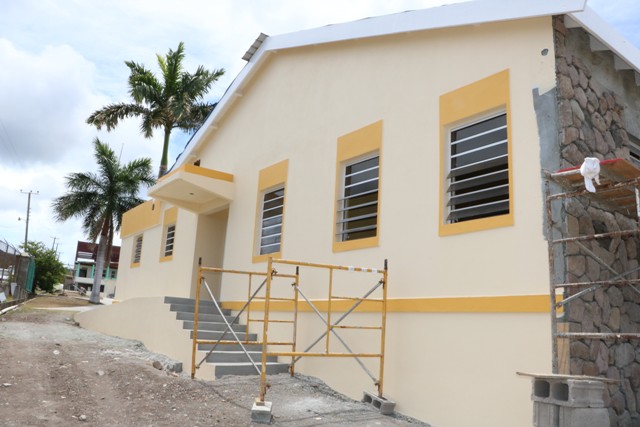 The expansion of the kitchen facility at the Flamboyant Nursing Home on Thursday, May, 23, 2019

NIA CHARLESTOWN NEVIS (May 24, 2019) — Hon. Hazel Brandy-Williams, Junior Minister of Health on Nevis has expressed satisfaction with an ongoing health related project, this time an expansion of the kitchen facilities at the Flamboyant Nursing Home on the grounds of the Alexandra Hospital.

The minister who was accompanied by Mrs. Shelisa Martin-Clarke, Acting Permanent Secretary in the Ministry of Health, and Mr. Gary Pemberton, Hospital Administrator, toured the project on Thursday, May 23, 2019, before articulating her thoughts of what she had seen.

“I must say that I am pleased with the near completion of this small but very significant project. We will be doing some extensive renovations to the main kitchen at the hospital and so we had to draw some extra space here, so that we can then move those persons who are working on that side over here. We needed the space so that we can fully utilise the capacity for the work over at the Alexandra Hospital.

“I am indeed very happy with what I am seeing. A few weeks ago we were here when the project started and to be here now to see what it is, I am truly happy that Mr. Clarke and his men have done an excellent job in the space of time that was allotted,” she said.

Mr. Pemberton stated that once commissioned, the kitchen staff for both health facilities could operate simultaneously with the expanded kitchen space.

“We are expanding this kitchen so the hospital staff will move in to the new area until the main kitchen is renovated, and then hopefully they will move back to their renovated location,” he said.

Meantime, Mr. Egbert Clarke, contractor for the project, confirmed it is nearing completion.

“We are about 95 percent completed. Just a little glitch here and there but I would say in at least two weeks’ time we will have everything completed…

“I am satisfied with what has been done. I did my very best and I do believe that the minister and those who have given me the opportunity to work, they too will be satisfied. So the next time they come around they would see everything is completed,” he said.