The Commissioner spoke to the Officers when he delivered remarks at the Division’s annual New Year’s Blessings ceremony on January 4, 2013, at the Headquarters in Charlestown.

He said a Special Victims Unit (SVU) had been created in 2012, with offices in both Nevis and St. Kitts and since then, there had been a marked increase in the number of reports of child molestation throughout St. Kitts and Nevis.

“Any man in this Federation that I find and I have a victim reporting is molesting his child whether it’s a boy or a girl, I am going to do my utmost to put him in prison.  I want you to develop the same attitude because that little girl may grow up to be your son’s wife. You guys need to think about these things. These are children.

“One of the things about this Federation the age of consent is 16 years old, why are we molesting 8, 9, 10 year old children? Guys, when you find this and you find the evidence lock him up. Let the judge decide they don’t want to prosecute, lock them up,” the Police Chief said. 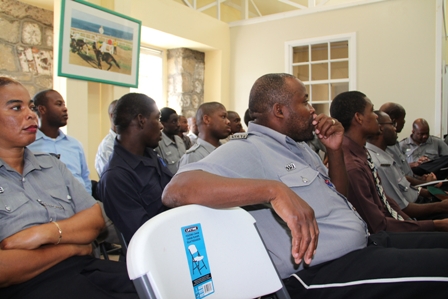 An impassioned Commissioner told the officers, that as Police they had to make a difference and whenever they received calls related to molestation they should inform the SVU.

“We have little boys also getting molested in this community but they are afraid to come forward because in our society in the Federation, we call them punks or anti man. We need to break away from that. If it is happening to a child it is not his fault and we need to let the children know that it is not their fault and we need to make sure that we collect the evidence and prosecute these scumbags, we need to,” he said.