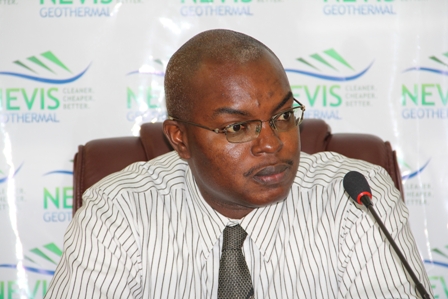 Permanent Secretary in the Ministry of Public Utilities and Renewable Energy on Nevis Mr. Ernie Stapleton

NIA-CHARLESTOWN NEVIS (June 17, 2011) — Permanent Secretary in the Ministry of Public Utilities and Renewable Energy on Nevis Mr. Ernie Stapleton described recent developments regarding financing of the Nevis Geothermal Project as nothing short of amazing and was a viable project.

At a recent press conference ahead of a campaign launched to create a better understanding of the benefits of geothermal energy for the people of Nevis Mr. Stapleton stated that financiers the Export-Import (Ex-Im) Bank of the United States had indicated their confidence in the project when they requested a sub sovereign guarantee from the Nevis Island Administration (NIA) instead of one from the Federal Government of St. Kitts and Nevis.

“Secondly, it tells us that the Export Import Bank has some confidence in the Nevis Island Administration and its technical staff because when they came to do their due diligence that was one of the aspects of their due diligence here on the island of Nevis.

“Thirdly, it tells us that there is tremendous confidence in the developer and his team. If you would take some time and look at the team that is working on the geothermal project for Nevis, these are gentlemen and companies that have been working with other geothermal developments throughout the whole world. They have the experience and they have the knowhow with regard to moving the project forward,” he said.

He also noted that the US Bank had looked at the project as a standalone one despite the fact the developers West Indies Power had initially approached them to finance the project with regards to St. Kitts and Nevis in the hope that it would make the project more feasible.

“What the Export Import Bank is now saying is that they have looked at the project and they are very comfortable with looking at the Nevis project and financing it as a standalone project. That does not mean that the second phase of the project will not be implemented, that is sending the submarine cable to St. Kitts to connect St. Kitts.

“That is still on the cards but in terms of the first phase, they are looking at the Nevis Project as a standalone bankable project for the island of Nevis and this is tremendous because what it means is that the project is at a certain standard that the bank is saying we do not have a problem accepting the Nevis Project as a standalone project in terms of financing,” Mr. Stapleton explained.

Meantime, the Permanent Secretary pointed to the high interest the Nevis Geothermal Project had generated internationally and said he was made aware of the growing interest by various companies and institutions in the project.

He noted the specific interest of the Federal Government of the United States who he said had began feasibility studies regarding the possibility of benefitting from the Nevis Geothermal Project.