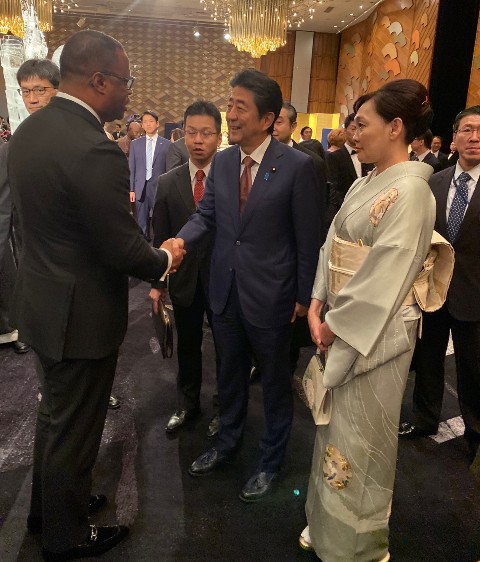 NIA CHARLESTOWN NEVIS (October 24, 2019) — Hon. Mark Brantley, Minister of Foreign Affairs in Saint Kitts and Nevis joined leaders and representatives from over 180 countries at the Ceremony of Enthronement of 112th royal leader of Japan Emperor Naruhito  in Tokyo, Japan over the past two days and joined in other related activities.

The ceremony which is steeped in rituals and history, was attended by hundreds of dignitaries, including Prince Charles of Great Britain, and other members of royal families from across Europe, Asia and Africa.

Emperor Naruhito, who had previously acceded to the throne in May following the abdication of his father Emperor Emeritus Akihito, declared at the solemn ceremony “I now perform the Ceremony of Enthronement at the Seiden State Hall and proclaim my enthronement to those at home and abroad.”

A court banquet at the Tokyo Imperial Palace held later that evening allowed Heads of State, royal family members and other invited guests to personally congratulate the imperial couple for about one hour.

The Hon. Minister also used the opportunity to engage other dignitaries including Prince Charles and Elaine Chao, U.S. Secretary of Transportation, and regional leaders from the Caribbean during the court banquet.

Guests were also allowed to the see the Emperor’s throne before sitting down to a nine course Japanese style dinner.

At a state dinner held at the Hotel New Otani in Central Tokyo for foreign dignitaries who had attended the enthronement ceremony the previous day, host Prime Minister of Japan in his remarks pledged that Japan will make even further contributions to the international community. He welcomed everyone back to Japan for the 20/20 Olympics and the 2025 Expo.

Guests were also treated to a performance by leading Japanese actors in the traditional arts and culture of Japan – Kyogen, Kabuki and Bunraku.