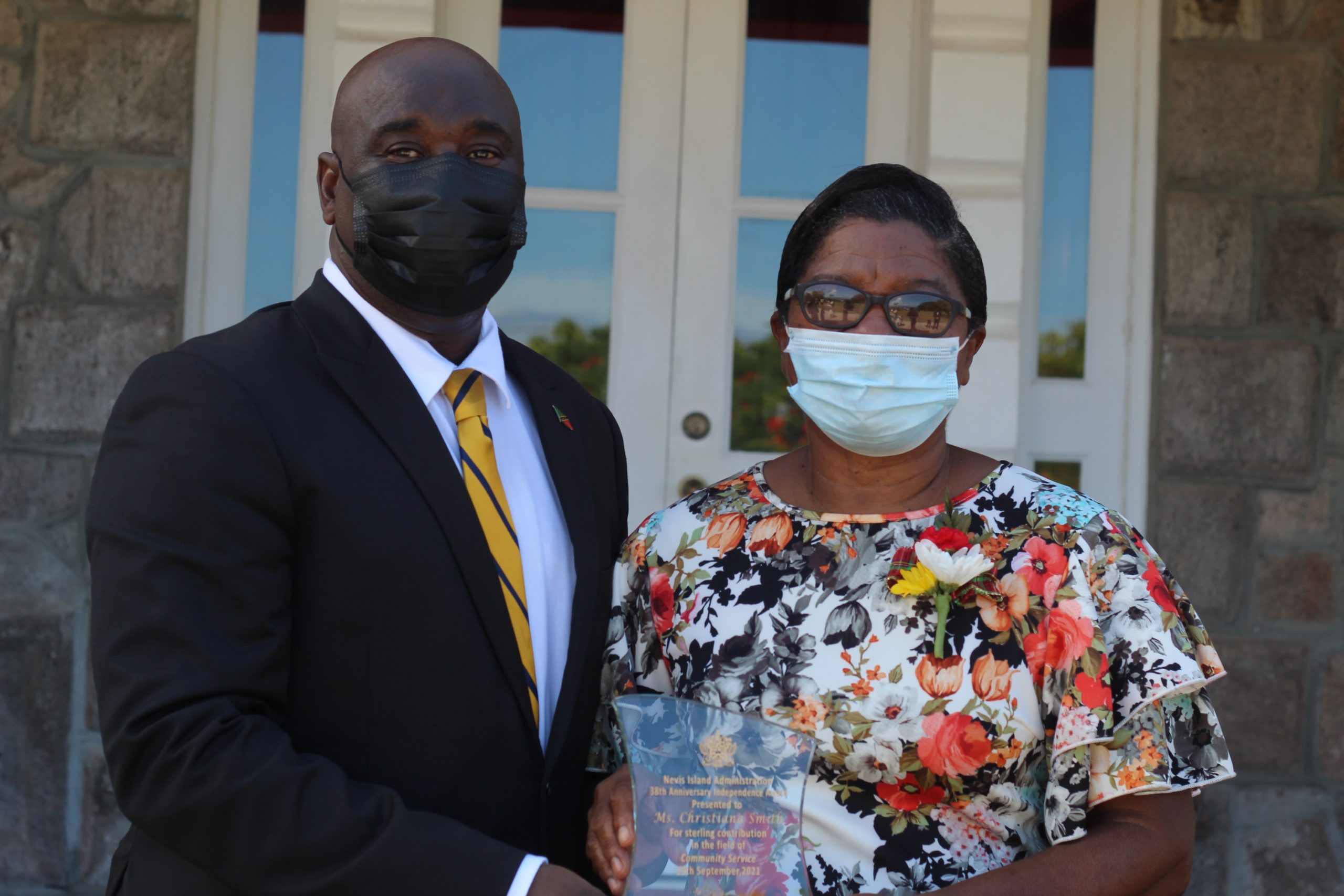 Ms. Christiana Smith from Fountain Village with Hon. Alexis Jeffers, Area Representative for St. James' Parish, showing off the award she received for Community Service on the occasion of the 38th Anniversary of Independence of St. Christopher and Nevis at an awards ceremony at Government House on September 20, 2021

NIA CHARLESTOWN NEVIS (September 29, 2021) — Ms. Christiana Smith, a 64-year-old grandmother of Fountain Village was one of the 11 persons honoured in Nevis in celebration of the 38th Anniversary of the Independence of St. Christopher and Nevis. She has etched her name in the annals of the island’s history books for her contribution to Community Service for which she is honoured.

During an awards ceremony at Government House on September 20, 2021, where she was presented with a plaque by Her Honour Mrs. Hyleeta Liburd, Deputy Governor General in Nevis, it was said that soon after Ms. Smith’s return to Nevis 57 years ago, having lived in St. Kitts from the age of seven, she observed with concern the regular occurrence of many boys loitering and engaging in reckless behaviour in the Fountain community with no apparent supervision.

It was as a result of her observation that she was moved to take action to create a club through which she could divert the boys’ attention and remove them off the streets. Following a meeting with parents and guardians to enlighten them on her observations, concerns and plan to tackle the issue, she won support from them to allow the boys to join the club.

Hence the Nuff Tings Boys’ Club (NTBC) was founded in Fountain Village in September 2015 with the motto “I can do all things through Christ who strengthens me.” The club was subsequently registered with the Department of Community Development in the Nevis Island Administration.

The club commenced with 32 boys from four to 18 years old. At that time Ms. Smith was assisted by Mr. Jason Seabrookes, Mr. Lynell Nolan, Mr. Ronald Powell and Mrs. Elvena Webbe. Today, however, she is assisted by Nurse Beverly Jones.

Ms. Smith believes that the club’s name is a direct reflection of the many activities in which the members are engaged. However, in light of COVID-19 and its associated protocols the club has been forced to significantly scale back its activities until permission is granted to do otherwise.

On a parcel of land which she owns at Spring Hill in Fountain Village, she was also able to finance the construction of a club house, and with assistance from the GEF Small Grants Programme (SGP) of the United Nations Development Programme (UNDP) in St. Kitts, a gazebo was constructed.

She says she has been able to continue her community service because of God and her relationship with Him. Ms. Smith thanks God first and foremost and every person and organisation who has made the club a reality and success, especially her family whom she has often times neglected in the process.