Director of Community Development Mrs. Janette Nisbett-Maloney
NIA CHARLESTOWN NEVIS (January 14, 2014) — Four students from the island’s two main secondary schools were the 2013/2014 scholarships awarded from the Alexander Hamilton Scholarship Fund. They were presented with the awards at an Awards Ceremony and Tea Party which was held at the Museum of Nevis History Grounds on January 10, 2014.
Ms. Kyla Seabrookes and Mr. Jah-Larney Brookes of the Charlestown Secondary School and Ms. Clarisa Dore and Ms. Shadae Stanley from the Gingerland Secondary School joined 16 other secondary schools students enrolled in the programme which has been a collaboration of the Nevis Historical and Conservation Society (NHCS) and the Department of Community Development Alexander Hamilton Scholarship Fund. 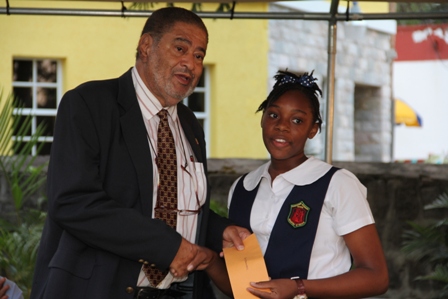 Director of Community Development Mrs. Janette Nisbett-Meloney explained that the Fund was established in 1966 by the Trott Family, to assist deserving secondary school students with uniform, fees, books and other school supplies.
Locally, the fund has been supported by members of the NHCS and members of the wider community but it is administered by the Ministry of Social Development, Community Development, Youth, Sports and Culture.
In her report on the Scholarship Programme, Mrs. Nisbett-Maloney urged students in the programme to treat the scholarship as a privilege and a responsibility. 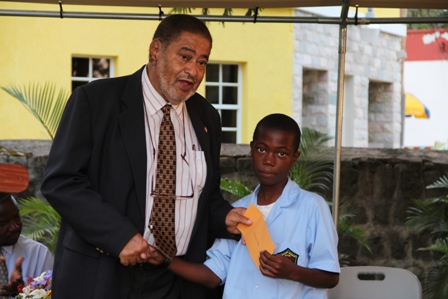 “Your school reports have shown that some of you have not worked in upholding the integrity of this scholarship. There have been instances of poor performances throughout the school year. It is hoped that there will be some major improvement in your work as of this term.
“I implore you to take some time to read about the life of the late Alexander Hamilton. He rose from humble beginnings to become a Founding Father of the United States, Chief of Staff to General Washington, one of the most influential interpreters and promoters of the American Constitution. He was a Lawyer, Military Leader, Political Scientist, Journalist and Government official. With a positive attitude, hard work and determination to succeed, you too can achieve greatness. It is your responsibility to maintain your status as a scholarship recipient,” she said. 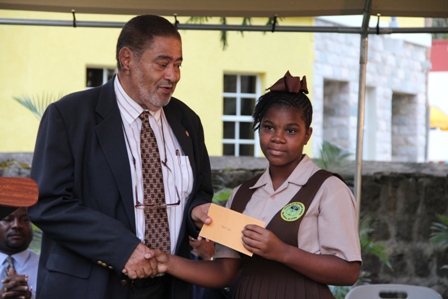 Mrs. Nisbett-Maloney further told the scholarship holders that according to their Term of Reference they were expected to maintain academic eligibility, submit the appropriate reporting forms and documents that were required by the Alexander Hamilton Scholarship Fund.
However, to the students who continued to perform creditably, she encouraged them to maintain their good work and said the expectation remained for great things from them in the future.
The Community Development Director also reminded of another key requirement of the scholarship programme. 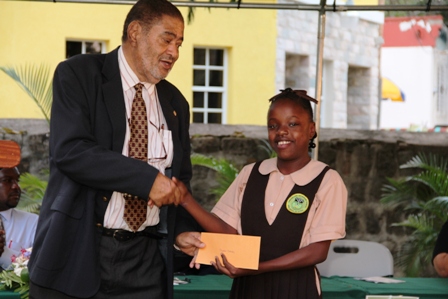 “One of the requirements of being an awardee is to engage in community service and some of our awardees have done exceptionally well in this regard. It is our belief that those who receive scholarships should see the awards as part of a commitment by the Nevis Historical and Conservation Society and the Ministry of Social Development, to assist in the development of our students academically, socially and to inculcate in them a sense of love and loyalty to their country,” she said.
Meantime, Mr. Leandre Dyer a student who was part of the Scholarship Programme spoke of how beneficial the Fund continued to be to him and others.
“The Alexander Hamilton Scholarship Fund has been very instrumental to me and of course the other recipients over the years. It has benefited us both financially and educationally. It has truly been a blessing. I never would have thought I would have gotten a scholarship but I know God had a plan for me which he said in Jeremiah 29:11 that states ‘For I know the plans I have for you declares the Lord. Plans to prosper you and not to harm you; plans to give you hope and a future.’ 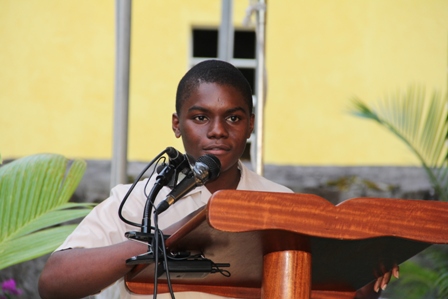 “Furthermore, a scholarship is not something that is achieved due to educational success but is achieved by hard work, dedication, effort and most of all perseverance. These are the four things required to be successful not only in academics but throughout our lives. So I encourage my fellow recipients to apply these four principles to their academic lives,” he said.
Mr. Dyer also thanked all who made it possible for him to benefit from the Scholarship Fund and wished it longevity.