Mrs. Sheila Hanley instructor at the Charlestown Secondary’s Sixth Form addressing participants at the Elquemedo Willet Park at the end of the World AIDS Day march through Charlestown

CHARLESTOWN NEVIS (December 01, 2010) — A call was made for Nevisians to give love from the heart to those inflicted by HIV/AIDS and victims of any sort.

The plea came from Teacher at the Charlestown Secondary School (CSS) Mrs. Sheila Hanley while she delivered an address at the Elquemedo Willet Park on Wednesday, after a march through the streets of Charlestown in solidarity with the United Nations annual observance of World AIDS Day on December 1st.

The March which was held by the HIV/AIDS Unit in collaboration with the Dental Unit on Nevis under the theme “Show Me Love”, was attended by Minister of Health Hon. Hensley Daniel, preschool and primary schools students and persons from other sectors of the Nevis Island Administration (NIA).

Mrs. Hanley described the slogan as one which represented a cry from the victims of HIV who felt abandoned, slandered or neglected by the society and health system that would draw greater awareness to the plight of victims.

“We are not yet a society where victims of any sort feel comfortable enough to brave the stares, stigma and the reproach of a condemning society. So World AIDS Days should bring awareness of suffering and the need for support. We might say we only do lip service because we really have not learnt to love. 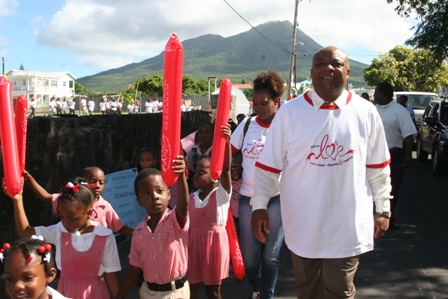 Minister of Health on Nevis Hon. Hensley Daniel in the march through Charlestown

“The slogan is more than just a cry from HIV Victims, it’s a universal cry that comes from the heart of all of us born into a savage, selfish, unkind world and while we are crying “show Me Love” we forget that we are the ones who must give love and if each of us gives a little here and there, the cry for love would be silenced in the face of our combined actions,” she said.

Mrs. Hanley told the youngsters present to not misunderstand the differences between love and sex and urged them as they grew up to choose their paths with caution.

“I make this advice to you who are yet young and innocent to, choose the path of abstinence. Illicit sex especially among teens and young adults is irresponsible. Put a high value on yourself. I did not say price, there is a difference…

“Value means knowing your true worth [and] having respect for self. I dare say show yourself love. Your body is crying out show me love, show me respect,” she admonished.

The CSS Instructor also used the opportunity to underscore the importance of love and explained it meant caring, sharing. She told those who had already entered into relationships that they should not settle for a few sensual moments but instead invest in love, a longer lasting, deeper, stronger bond. 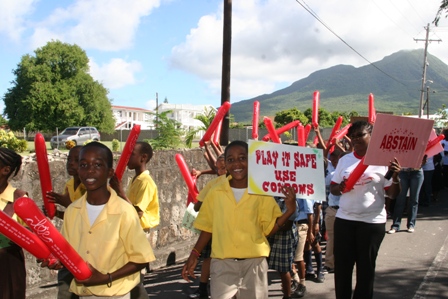 While many relationships evolved round a sexual partnership, Mrs. Hanley said at some point everyone admitted the need for love.

“When life sends a wave to rock your boat; HIV maybe, we do need the love and support of a partner, a brother, a pastor, a community. Let us not be blinded by fear, ignorance and greed. Let us be sensitive and caring as family members, communities, churches, schools.

“After all, we do need honesty for that’s what love is. In our society, honesty is preached as a virtue for the very young but the actions of adults muffle the message. Adults who carry on the extra marital affairs, who cheat, lie, ‘players’ who masquerade as good citizens. Irresponsible behaviour that can only reap dire consequences for the young who place their footsteps in the muddy prints we have left behind,” she said.

In conclusion, Mrs. Hanley also called for an end to what she termed a vicious cycle perpetrated by those who continued to sow the seeds of hurt and abuse.

“Let us change our world with love, let’s break the cycle of fear and selfishness and invade with love our homes first, our schools and communities. The theme makes a demand on each of us; it’s a command, an imperative ‘Show me love’,” she said. 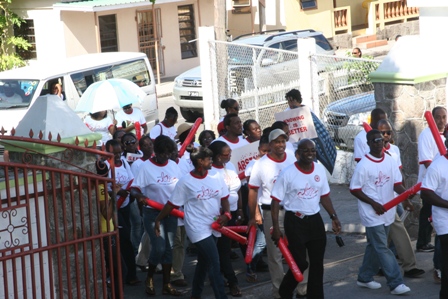 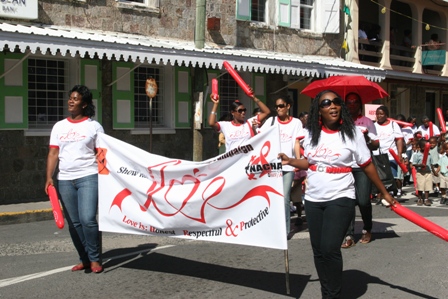 The tail end of the march entering the Elquemedo Willet Park