In his near three-hour Budget presentation, Mr. Amory noted that the Administration’s interest was simply to restore faith and confidence in the Nevis economy.

“Our interest is to restore probity, prudence and thrift in government, so that we can create the fiscal space and enabling environment to grow the economy out of recession,” he said.

The Finance Minister explained that Nevis had vast potential for economic development including its talented people at home and in the Diaspora.

“We have arable land for agricultural; we have the potential for wind, solar and geothermal energy and we have a pristine environment alluring to visitors and investors. What is needed now is dynamic leadership that could motivate our people and leverage our assets, to enhance our competitiveness in the global economy.

“I can assure everyone, that this Concerned Citizens Movement-Government has the intellectual, political and social capacity necessary to advance the economic interest of our people as we face the challenges of the future. However, we all have an important role to play,” he said.

According to Mr. Amory, the Administration had to increase productivity faster than wages; boost exports by being more creative in business and finding niche markets among others.

“We have to find ways to reduce input cost by developing alternative energy resources and lowering taxes and tariffs; we have to develop policies to make credit more accessible by reducing interest cost and we have to live within our means by controlling debt accumulation,” he said.

The Finance Minister explained that the NIA was fully engaged in the management of the economy although its role was to create an enabling environment. 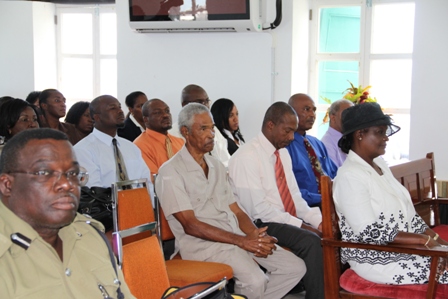 “Ultimately, our success as a people will depend on the enterprise, energy and initiative of individuals and organisations searching for opportunities and promoting the common good,” he said.

Mr. Amory added that the Administration was also aware that there were some vulnerable members in the community who would require assistance and had already provided relief with the introduction of a 25 percent reduction on electricity bills.

However, he stated that as the fiscal fortune of Nevis improved over time, the Government would look at other areas in an effort to provide additional relief, so they could have a better quality of life and be able to provide for their future security.