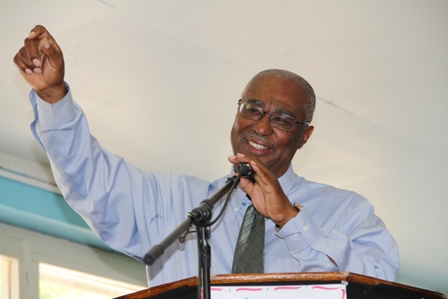 NIA-CHARLESTOWN NEVIS (April 11, 2011) — Fifth Form students on Nevis began receiving their laptops under Phase One of the One-to-One Laptop Programme for the Federation of St. Kitts and Nevis on Friday, one day after Premier of Nevis and Minister for Education and Library Services in the Nevis Island Administration (NIA) Hon. Joseph Parry told them it was the Government’s duty to ensure their advancement.

Mr. Parry was at the time delivering remarks to the 5th Form students from the Charlestown, Gingerland and Lyn Jeffers Secondary Schools on Thursday, at a brief but significant ceremony at which their Principals each received a laptop.

“This government led by me, it always has been people focus but more importantly it is youth focus.

“Our business, our duty is to ensure that you the young people of this country continue to move forward [and] continue to grow and that you get the best benefits of the efforts of any government on the island of Nevis,” he said. 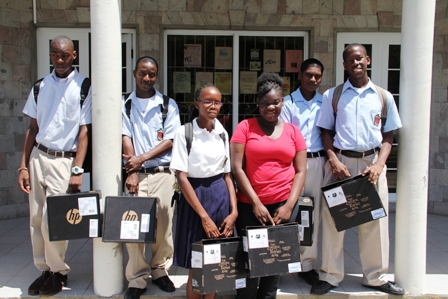 The Premier also expressed satisfaction with the Taiwanese and Federal Governments for making the laptop programme a reality and also praised Attorney General Hon. Patrice Nisbett who ensured that Nevisians received their fair share of the project.

“We are starting with the Fifth Forms of the Gingerland High School and the Fifth Form of the Charlestown High School and eventually computers will be made available to all the children right down to Form One and so there will be no excuse in terms of improvement in your lessons,” he explained.

The Minister of Education further noted that the expectation was a100 percent computer literacy among children on Nevis. So far computer banks have been provided in all primary schools and children had access to computers and were already knowledgeable with them. 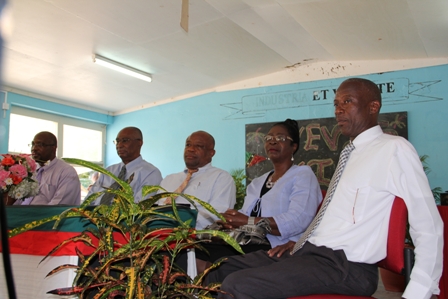 The Premier used the opportunity to admonish the students to use the laptop as an educational tool to enhance their knowledge base and personality even though they would be able to use it for reaction at times but warned them to not be tempted to tinker and tamper with the device but instead they should focus on helping themselves.

Minister responsible for Communications on Nevis Hon. Carlisle Powell was also present and welcomed the students to the information age.

“It has taken us sometime to get to this, we still are not there yet but with each student having your own individual computer, think that it is bringing you into the information age and think further that this very simple act, simple as it might seem, will be saving you and your parents some money. 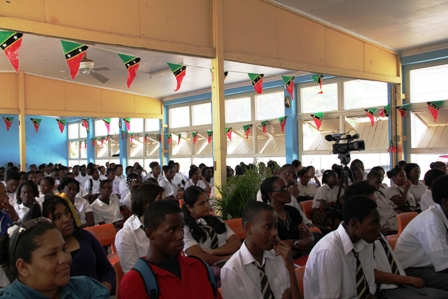 “So welcome to the computer age, welcome to your own individual computer…Good luck, take care of the computers and just be patient each computer has to be registered has to be logged and that is why you are getting them individually so that the information can be collected. Good luck and congratulations,” he said.

Deputy Premier and Minister responsible for Youth on Nevis added his voice and informed the students that the NIA had put them on the information highway, in line with and alongside all the students in the developed world.

He urged them to see the computers as an attempt by the Government to ensure that they improved the teaching/learning situation in the classroom and also he urged them to pay greater attention to research and analysis which would improve their scope of understanding and learning.

The Youth Minister said education had always been a priority for the sitting NIA and therefore anything which enhanced the education abilities of the students they would be available to assist. 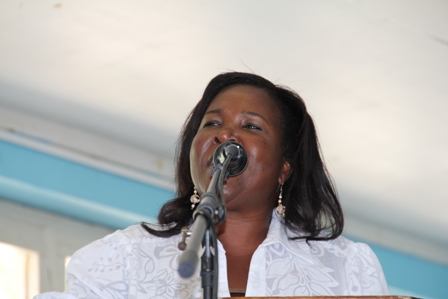 Mr. Daniel also told the students that they were in a privileged position but their performance would be monitored to ascertain whether the computers helped them to perform better in school

“Ultimately that is our objective and I would say to you your parents and the rest of Nevis would expect nothing less.

“So from us in the Ministry of Youth we say welcome to the information highway, welcome to the opportunity to make a huge difference in education and by extension the wider community of Nevis. All the best, make good use of the computer, good maintenance and please treat it as though you bought it,” he said.