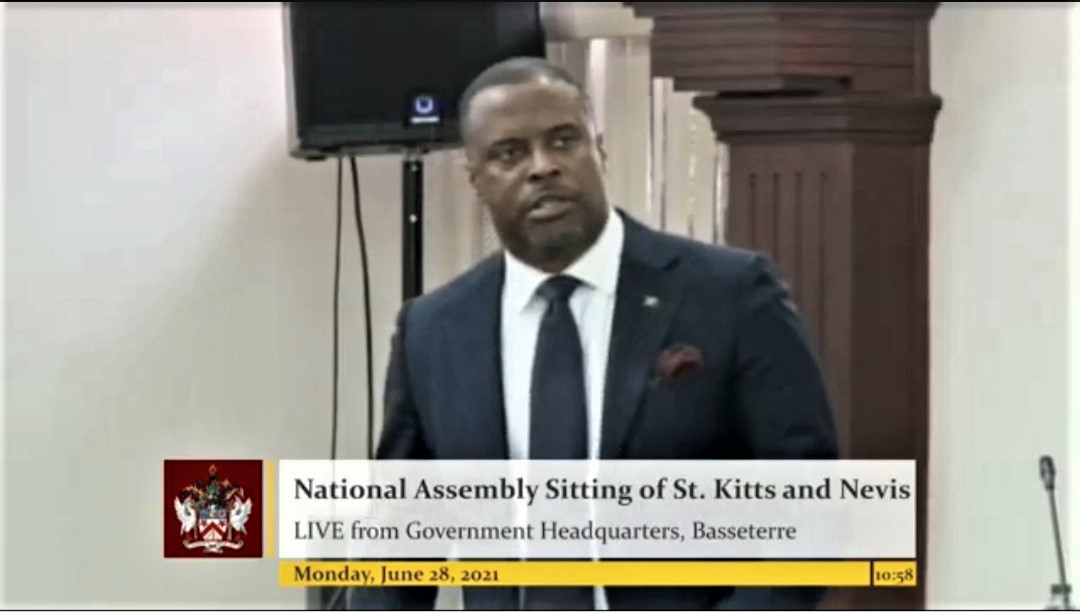 Premier Mark Brantley, Minister of Foreign Affairs and Aviation the Government of St. Kitts and Nevis, during an emergency sitting of the National Assembly on June 28, 2021

Mr. Brantley, a member of the federal Cabinet, seconded the Motion moved by Prime Minister Hon. Dr. Timothy Harris to have the Resolution debated and passed in the parliament. The Resolution would effect a State of Emergency in the twin-islands until December 31, 2021.

“It is not an easy thing for any government to come to parliament to talk about a State of Emergency. Indeed States of Emergency are ordinarily associated with difficulties in the country, for good reason. We had hoped we would not have been back here at this point, and what we have come today to do ought not to cause any alarm in the community…

“We understand that some members of the public naturally hear State of Emergency and they become alarmed, but I believe that all of us should understand that this is merely a constitutional mechanism to ensure that everything done in terms of keeping our people safe- curfews, the relevant provisions, stay at home orders and the like- that they accord with law and that they have the full backing of the Constitution and of the laws of St. Kitts and Nevis, which is a country founded on law and a country where the rule of law is paramount,” he said.

The Honourable Minister of Foreign Affairs and Aviation explained that under the Constitution, the Governor-General can declare a State of Emergency only for a period of 21 days, after which it can only be extended by Parliamentary Resolution.

He said as a responsible government, it is critical they ensure that they act with appropriate constitutional rectitude as St. Kitts and Nevis is a nation of laws and the Constitution remains its supreme law.

Mr. Brantley went on to note that the government is fully cognizant of the economic and psychological impacts of implementing the COVID-related restrictions, however difficult decisions had to be made in order to safeguard lives and livelihoods in St. Kitts and Nevis. St. Kitts is presently under a two-week lockdown and stay at home order, while Nevis, which has no active COVID-19 cases at this time, remains open for business, maintaining a 6 p.m. to 5 a.m. curfew with other restrictions including no mass gatherings or dining in at restaurants.

“This government has sought to do all that it can do. We have encouraged, we have begged, we have beseeched. We have taken hard decisions early; we have continued even today being here, to take difficult decisions because we recognize that we have a duty to preserve life and to protect the lives of our people.

“We understand that there is the constant debate about lives and livelihoods, but I believe it was the Prime Minister who put it best in a prior address that without lives there could be no livelihoods. And so the approach that we’ve taken is one driven by the science and driven by the data, but it’s an approach that seeks to put the lives of our people at the forefront, and to make the lives of our people our primary response- saving lives,” he stated.