Premier of Nevis (r) presents an appreciation plaque to No. 189 Corporal Errol Hobson
NIA-CHARLESTOWN NEVIS (May 26, 2011) — Premier of Nevis and Minister responsible for Security Hon. Joseph Parry, reiterated his unwavering support for officers of the Royal St. Christopher and Nevis Police Force – Nevis Division, as he commended them for their proficient duty.

Mr. Parry addressed the officers while he delivered remarks at an Appreciation Ceremony held at the Recreation Room of the Charlestown Police Station on Thursday, in honour of No. 189 Corporal Errol Hobson, who will retire from the Police Service after 27 years. He was enlisted in the Organisation in 1984 but served most of his years in St. Kitts and the last six in Nevis.

The Nevis Security Minister told the Officers that although some of them had been reassigned to Nevis from St. Kitts, in some cases under difficult circumstances, nonetheless, Nevis had benefited immensely from their tenure.

“I cannot hold myself responsible and I do not wish for you to hold Nevis responsible for whatever happened in the past. I know there is some dissatisfaction, I cannot help for that. I do what I can to help you [Officers stationed on Nevis] because I respect you.

“We [NIA] have helped quite a lot and I am not going to go into the details of what we have done, simply to say that the Force has responded very well and I am pleased right now with the level of performance of the Force. Crime seems to be under control and you are there dealing with these drug people who are not behaving themselves. You have one of the highest levels of crime solutions in the Caribbean and in the world and you deserve a round of applause for that,” he said. 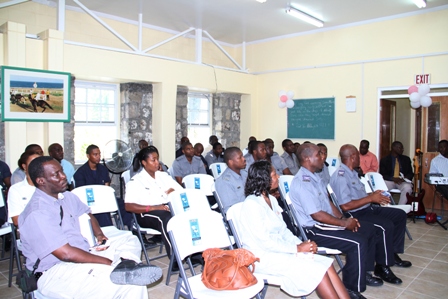 Police Officers stationed at the Royal St. Christopher and Nevis Police Force – Nevis Division, in attendance at the Appreciation Ceremony for Corporal Hobson For more news out of Nevis visit www.nia.gov.kn your window into Nevis.

Mr. Parry told the Officers they served Nevis well and he would continue to support heir efforts.

“I believe that St. Kitts loss is Nevis gain because certainly, with people like Hobson bringing their skills to bear on the island of Nevis, these are the reasons why we are doing so well and we continue to do so well.

The Premier also had words of gratitude for past and present Officers who served in leadership capacities at the Nevis Division. He commended them for the Unit they had created and was impressed with the brotherhood that existed in the Division.

Mr. Parry also used the opportunity to applaud Officers who served in the original Drug Squad along with Mr. Hobson including Mr. Austin Lescott. He noted that he was in Government at the time and the Squad had been commended highly in published articles, by both the British and Americans for its outstanding performance.

However, though the Nevis Security Minister wished Mr. Hobson well in his retirement he said he regretted his departure.

“I am sorry you are leaving because you could have served as a great example to the younger members of the Force and you could impart a lot of your expertise and experience to help them through these trying times,” Mr. Parry lamented.

Before the end of the Ceremony, Premier Parry also presented Corporal Hobson with an appreciation plaque.

The event was attended by fellow offices of the Division and Senior Officers in the hierarchy of the Royal St. Christopher and Nevis Police Force, who journeyed to Nevis for the Ceremony.