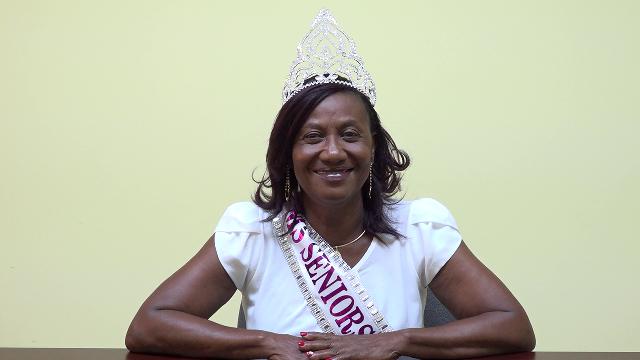 NIA CHARLESTOWN NEVIS (October 30, 2019) – Idella “Della” Wallace, 62, is still beaming with pride after she was crowned winner of the second annual Miss Nevis Senior Queen Pageant hosted by the Ministry of Social Development through the Department of Social Services, Senior Citizens Division at the Cultural Village, a stone’s throw from her home in Lower Stoney Grove on October 26, 2019.

Ms. Wallace won among four contestants who made judged appearances in Sportswear, Talent and Eveningwear before an appreciative crowd of at least 1,200 spectators. Idella captured the title amassing 520 points from a possible 600. In an interview with the Department of Information on October 29, 2019, she could hardly contain her elation.

“I feel good about myself. I feel so good that I didn’t let down my children. My grandchildren and my supporters…Well it was a big moment, a big moment. I was a bit scared but I just tell myself I can do it and I just do it. When they announced that I won a little tears come to my eyes, I bend down and I give thanks…

“Well I [am] getting a lot of support on the street still. People meet me, hug me, congratulate me. Some give me one or two gifts and tell me well I did good. I was excellent. So I feel good about that. I never thought that this would happen to me. I was never approached to go on a stage. I didn’t think it would happen,” she said.

Regarding the reaction of her children and grandchildren, Idella believes her accomplishment will be etched in their minds forever.

“My eldest child my son, didn’t say anything. He just was grinning from ear to ear. Up to now I don’t hear him say one word. All I see is just teeth, just grinning, grinning, grinning. I could have seen the proudness in his face, and the joy in his face but I didn’t know what‘s going on in his mind but I know it’s good things [that] was going on in his mind. His face alone could tell me. My daughters, they were excellent. They were proud. One of them worked with me. One of them was my chaperone. So proud! They were proud!” she said, adding that support and encouragement also came from other senior citizens and her family members at Newcastle.

In an invited comment on how she felt about the crowd support during the pageant, Idella smiled and noted that she didn’t have a choice but to forget them.

The Nevis Senior Queen said she always had the desire to enter a pageant but the opportunity never presented itself when she was much younger.

However, when she was approached by the department to participate in the pageant she didn’t turn down the offer, thinking it was an opportune chance to take the stage to show what she could do. Though it was her first time in a contest, it was not her first time on the stage.

Idella used the opportunity to encourage other senior citizens to take part in the contest like she did.

“Go for it! Go for it! Once you have the mind-set and the boldness, go for it. It’s a good experience,” she said.

The other contestants in this year’s pageant were Jeanette Grell-Hull of Budgeon, Govanie Butler of Camps and Josephine Maynard from Butlers.

The pageant was one of the activities celebrating senior citizens on Nevis during Seniors Month in October, in observance of International Day of Older Persons on October 1st. Last year’s winner was Ms. Mareta Hobson.