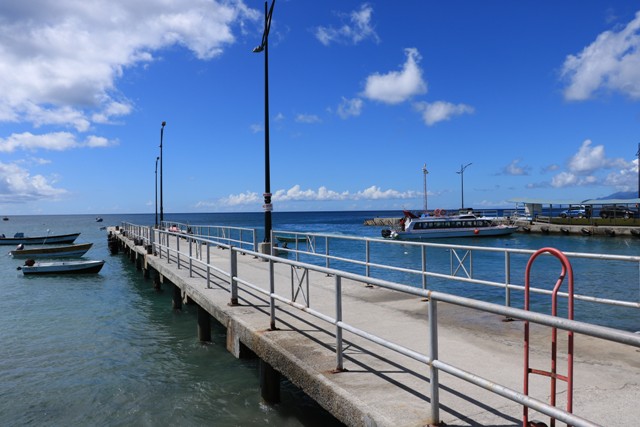 NIA CHARLESTOWN NEVIS (October 31, 2019) — Construction of one of the piers at the Charlestown waterfront, which was severely damaged and rendered unusable by the passage of adverse weather two years ago, will commence on November 01, 2019.

Hon. Mark Brantley, Premier of Nevis and Minister of Finance in the Nevis Island Administration, made the announcement at his monthly press conference at Cabinet Room at Pinney’s Estate on October 31, 2019.

“I am happy to announce today that the contract has been signed. The amount on the contract is US$325,330.00 to reconstruct the damaged pier in Charlestown, and that work, we are told, will start November 1st and will continue until it’s slated to end on December 23rd…

“That contract has been signed with a local company, St. Kitts Marine Works Ltd.,” he said.

Mr. Brantley noted that the NIA had taken note of legitimate concerns raised by members of the public about the condition of the pier, and had been seeking to find the resources to deal with the matter.

The Premier gave the assurance the construction would not have a negative effect on the cruise season on Nevis.

“For the last two years we have not been using that particular pier for the cruise season so we do not anticipate that it will have any disruption,” he said.

Meantime, Mr. Brantley used the opportunity to commend the Nevis Air and Sea Ports Authority (NASPA) for its efforts. He apologized to members of the public who complained about the status of the pier.