International Monetary Fund Country Representative for St. Kitts and Nevis Ms. Judith Gold and Premier of Nevis and Minister of Finance in the Nevis Island Administration Hon. Vance Amory outside the Ministry of Finance conference room on May 13, 2014
NIA CHARLESTOWN NEVIS (May 14, 2014) –Economic growth on Nevis is recovering. That assessment came from International Monetary Fund (IMF) Country Representative for St. Kitts and Nevis Ms. Judith Gold, when she spoke to the Department of Information on May 13, 2014, following a meeting with Premier of Nevis Hon. Vance Amory and Acting Permanent Secretary in the Ministry of Finance Colin Dore at the Ministry’s conference room.
Ms. Gold who led a five member team from the IMF and two representatives from the Eastern Caribbean Central Bank in Basseterre that concluded the ninth and final review under the three-year-old Stand-By Arrangement with St. Kitts and Nevis which will expire on July 26, 2014, noted that the recovery was driven primarily by construction.
“I would say there has been much progress under the arrangement in the last three years and we are very pleased to see that the country, we think, has really turned and things are improving and we hope they continue to improve over the coming months.
“We see a recovery in the economy in economic growth, primarily driven by construction and the [Citizenship by Investment] CBI receipts that have been able to fund the [People’s Empowerment Programme] PEP as well as some other investments as well as recovery in tourism, especially in Nevis in 2014.  The season, we understand, has been very strong. In St. Kitts a little less so partly because of the connectivity issues related to the bad weather in the United States,” she said.
According to Ms. Gold, the fiscal situation had also seen improvements which she attributed to prudent fiscal management.
“The fiscal situation is much improved both because of prudent fiscal management in both St. Kitts and Nevis and because of substantial revenues coming from the CBI and [Sugar Industry Diversification Fund] SIDF. As a result, the Government was able to provide the 13-month bonus in 2013 and proceed with the wage increases in 2014 and plan over the coming years,” she said.
Ms. Gold also commented on Capital Expenditure in St. Kitts and Nevis and offered advice.
“The Capital Expenditure is now improving more in St. Kitts than in Nevis at this point but this is a work in progress. The external situation has also improved and overall we see positive signs.
“I think going forward, our emphasis is to ensure prudent management over the coming years to take the additional revenues and use them carefully, to make sure that the situation would be sustainable into the medium term,” she said.
The IMF Representative also wished the Administration luck and thanked Premier Amory for his collaboration and cooperation and expressed her pleasure with working with the Nevis Island Administration.
Meantime, Premier Amory who is also the Minister of Finance in the Nevis Island Administration in a brief comment explained that it was Ms. Gold’s second visit to Nevis for discussions with the NIA to see how Nevis had done in the first quarter of 2014. Her first visit was in January 2014 to look at the island’s 2013 activity.
He said he was pleased to report to the IMF that the Administration was looking forward to a positive year. 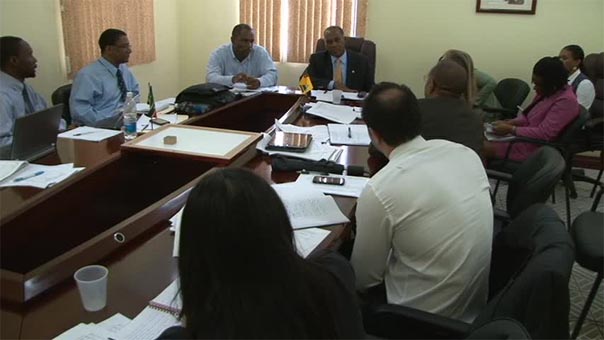 “I am happy that we have been able to discuss and I have been able to say to Ms. Gold that the Nevis Administration is looking to a positive year of investment in terms of our own attempts to manage the resources, the finances of Nevis,” he said.
The Stand-By Arrangement with the IMF is a fiscal reform programme which the Federal government entered into in 2009/2010 to reorganise its finances and to put St. Kitts and Nevis on a path for sustainability. Included in that programme were measures to reduce the high level of indebtedness. The main component of which was the Land for Debt Swap for which the Crown lands would be sold to pay debts.
Also present at the IMF meeting was a Budget and Fiscal team from the NIA’s Ministry of Finance.