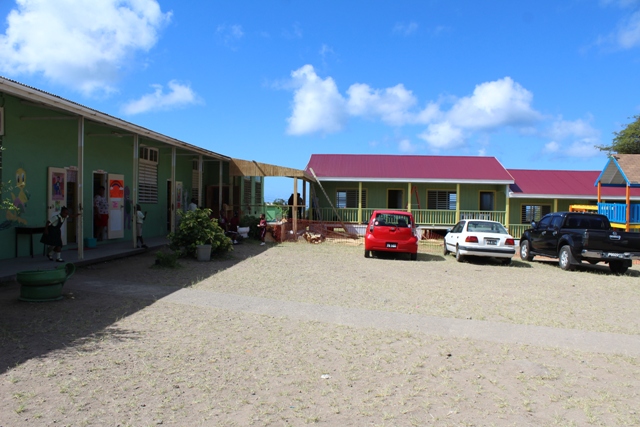 Where the old and new sections meet at the in the expansion project at the Ivor Walters Primary School on November 01, 2018

NIA CHARLESTOWN NEVIS (November 02, 2018) — The expansion project at the Ivor Walters Primary School which commenced in mid-August, is just one week away from completion and Hon. Spencer Brand, Acting Premier of Nevis and Minister of Public Works, is expressing satisfaction with the venture.

The $300,000 project executed by the Public Works Department seeks to provide additional space for the school’s student population and easily accessible washrooms. Mr. Brand toured the project on November 01, 2018, for a first-hand look at the progress so far.

“I want to say how impressed I am with the quality of work that we are seeing here and I believe the Head would have expressed her satisfaction, and once the Head and staff are happy then we at the ministry certainly would be happy.

Mr. Brand explained that the overcrowding at the school warranted corrective measures to ease the problem.

“We met a situation here at the Ivor Walters Primary School, where the number of students were bursting at its seams, really with the size of the classrooms, and we took a decision to, in the shortest possible time, to try and alleviate that problem, and thus we are here with this expansion of three classrooms with additional bathrooms,” he said.

The minister believes that on completion of the project, both the school’s staff and student population would be more comfortable in an environment more conducive to learning.

“We want to continue to make sure that we allow our teachers and students to have that environment where they can continue to flourish but I’m very happy and I’m satisfied.

Principal Mrs. Janice Richards said the school is pleased with the extensive work done on the expansion, and they could hardly wait to move in. She also commended all the parties involved in making the project a reality.

“We are thrilled with what we are seeing. I think Mr. Williams and his team, they are doing a tremendous job. At first we thought it was going to take a shorter time but with the magnitude of work that we are seeing here, they are taking their time to do an excellent, an A-plus job.

“I must commend them for what they are doing and I think that this is a timely gesture so we can’t wait to go in the complete structure. I must say thank you to all who are involved in getting this new structure for the school and we are looking forward with delight to have this new structure being completed,” she said.

Meantime Mr. Raoul Pemberton, Director of the Public Works Department, explained that the department was responsible for designing the project and all aspects were considered to ensure that it blended in with the older section of the school.

“The design took into consideration the functioning of the school, the movement of the children and teachers, the easy flow of traffic and as said by Mrs. Richards she thinks that it blends in well with the older section of the school.

“We designed an additional three classrooms as was requested in terms of space by the school’s administration and also we had constructed a new guidance counsellor’s section. I think that is something that has been requested for quite a few years. I’m pretty happy that finally we were able to have it incorporated in the design,” he said.

Mr. Pemberton added that consideration was also given to the washrooms for both male and female students. The older washrooms at the school were detached from the main building and were problematic in times of inclement weather due to the lack of a covered walkway.

“We have these new bathrooms. It has covered passageway from all the bathrooms and administrative areas to these bathrooms so just in case of heavy rains the children can move freely to these areas,” he said.

The project was led by PWD workers Mr. Eucline Williams while Mr. Alister Thompson, supervised the works, while the design was headed by Mr. George Hunkins and Mr. Stedroy Pemberton.

Dr. Ernie Stapleton, Permanent Secretary in the Ministry of Communications and Works, was also present.