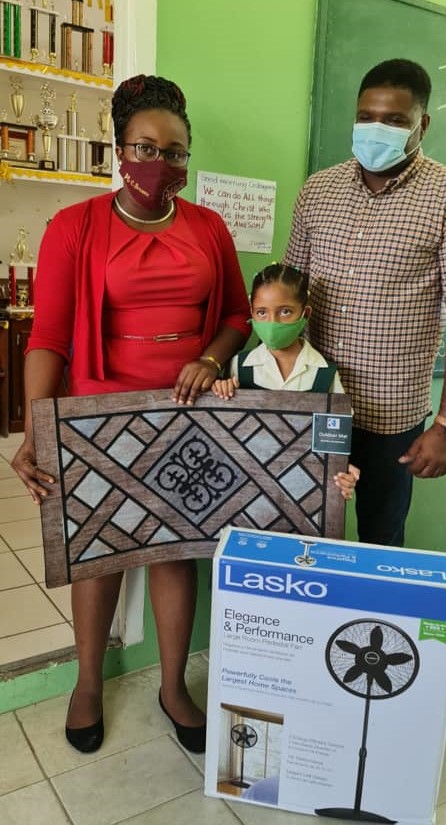 (Far right) Hon. Troy Liburd, Junior Minister of Education in the Nevis Island Administration handing out awards to students of the Ivor Walters Primary School on behalf of St. Johns’ representative Hon. Mark Brantley, Premier of Nevis for their participation in an anti-bullying Virtues Project on October 09, 2020

Mr. Liburd encouraged the students to be of virtuous character and not engage in bullying so they could grow up to become productive adult role models.

“To be a virtuous person, that is someone who is good, someone we can all rely on, someone we can all look up to, persons who are kind and loving. Those are the kinds of young persons we want to develop in our society today. It warms my heart that the school is putting on this initiative. I believe that the island of Nevis is in good hands.

For the project, each class was assigned a virtue, such as respect, tolerance, love, compassion and courtesy. The students were charged with creating an innovative banner depicting the virtue.

Minister Liburd handed out the certificates and gifts which included clocks, floor mats, gift baskets with school supplies and fans.

Ms. Shevonne Lowe, Guidance Counsellor at the school, congratulated the winning class, Grade 2-2, and commended all the students for a job well done in creating the virtues banners.

She explained that while the project was aimed at addressing bullying, it was fashioned in a way that would promote the positive traits children should exemplify.

“We did not want the project to focus on the word bullying. We wanted a more positive impact so we decided to go with the virtues project, allowing the children to integrate these values in their daily living so that we will definitely have an environment of tranquillity and peace.

“We will not be entertaining bullying at the Ivor Walters Primary School,” she said.

Also present at the award ceremony were Mrs. Janice Whittaker-Richards, Principal at IWPS and Mr. Shefton Liburd, Education Officer responsible for the school.

Minister Liburd was given a tour of the classrooms to view the various virtues banners and was treated to a brief performance about respect from the students of Grade 2-2.