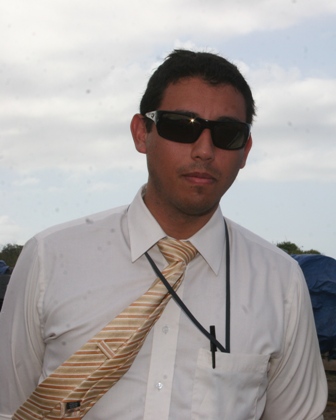 CHARLESTOWN NEVIS (March 25, 2010) – A German Energy Specialist sub contracted  by the Organisation of American States (OAS), Department of Sustainable Development, said he was pleased with the location selected to develop a Wind Farm on Nevis. During a visit to the site on Tuesday, he said it was well suited for the $10 million wind energy project, the first of its kind in the English speaking Caribbean.

Managing Director of the German Professional Energy and Environmental Consultancy Mr. Andreas Jansen, who formed part of a two member OAS delegation who visited Nevis to discuss with government officials and stakeholders about the development of a national energy policy, shared his thoughts on the project with the Department of Information.

“It is a very good wind farm site here. As an energy specialist working in wind energy for nine years, I can say this is a very good site for wind energy. We don’t only feel it [wind] today, we also can see a low raftness here a nice aerographic effect and … at the shore line,” he said.

Mr. Jansen acknowledged the challenges faced by the developer who brought that type of project to a small island. However, he said there was much for Nevisians to be proud and complimented the government for creating the enabling environment for the investor.

“There are also challenges to overcome for a project developer coming to a small island like here, bringing wind turbines and new technology,  many barriers to overcome  but all in all people can be very proud of the achievements they have made. They [developers] look for a good spot, the government corporate in an appropriate way, so that investors and developers can put their feet and they stand stable,” he said.

The Energy Specialist said the Nevis case was a good example of what happened in many other countries that had a high wind potential and was very dependent to a large extent, on imported fuels.

He noted that wind energy offered, in specific margins, a very good opportunity to lower costs and develop the energy metrics to a sustainable one which he said would be reflected in a national energy policy spearheaded by the OAS and funded by the European Union.

Mr. Jansen explained that once developed the policy would set out the baseline for future developments which would make it easier for projects like the wind energy to be established in the future.