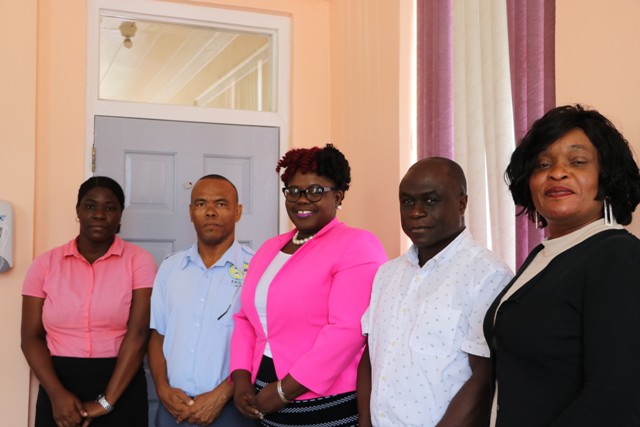 NIA CHARLESTOWN NEVIS (September 10, 2019) — The Ministry of Health on Nevis has embarked on an anti-Aedes Aegypti drive in an effort to avert any outbreak of dengue fever on the island. Hon. Hazel Brandy-Williams, Junior Minister of Health, made the announcement on September 09, 2019 at her Charlestown Office.

She said the move comes in response to the Pan American Health Organisation’s (PAHO) warning in August 2019 that countries in Latin America and the Caribbean should prepare for possible outbreaks of dengue.

“The Ministry of Health and Gender Affairs has designated the month of September as Amnesty Month, as a clean-up campaign month. There is an imminent threat of an outbreak of dengue in the Caribbean and so we are trying as far as possible to eliminate the Aedes Aegypti mosquito from the usual places where it is likely for them to breed and replicate.

“And so I have with me members of the [Nevis] Solid Waste Management Authority as well as the Environmental Health Unit who together will help me to promote the Amnesty Month because we are expecting persons to take advantage of what we have in store for you… They are coordinating this very important drive and I must say so far the collaboration is going exceptionally well and I’m very pleased,” she said.

Mr. Andrew Hendrickson, General Manager of the Nevis Solid Waste Management Authority speaking of the authority’s role in the month-long awareness campaign, explained what amnesty entailed in relation to the drive.

“Any household or any commercial entity who has an accumulation of white goods, tyres, old galvanise, anything that can catch and retain water which facilitates the breeding of mosquitoes, we are accepting it free of charge when they bring it to the land fill.

“Also, we have put a pause on our bin rental service so for the month of September we are not renting our roll off bins because all of the bins will be utilised in the facilitation of this drive,” he said.

Mr. Hendrickson added that the Environmental Health Unit would be responsible for supervising the bin loading process.

“They will be overseeing this process to ensure that the loading of the bins is not abused, and by that I mean only the relevant items that will be accepted to be placed in there.

We will not be accepting wood and grass and construction debris. We are particularly interested in anything that will catch water and retain it, that facilitate breeding of these mosquitoes,” he said.

Meantime, Environmental Health Officers Mr. Patrick Newton and Ms. Risa Paul stated that garbage bins would be placed in strategic areas in various communities to give residents the opportunity to capitalise on disposing the relevant garbage.

On Monday, September 09, the bins were placed in Lower and Upper Bath Village. On Tuesday September 10 they were placed at the intersection of Stuart Williams Drive and Government Road, in the vicinity of Club Trenim; and at Lower Stoney Grove/Park Range.

On Wednesday, September 11th, the bins will be placed at Craddock Road, in the vicinity of Big Rock, opposite the Myers family home; and at Ramsbury, in an open lot above the Charlestown Primary School.