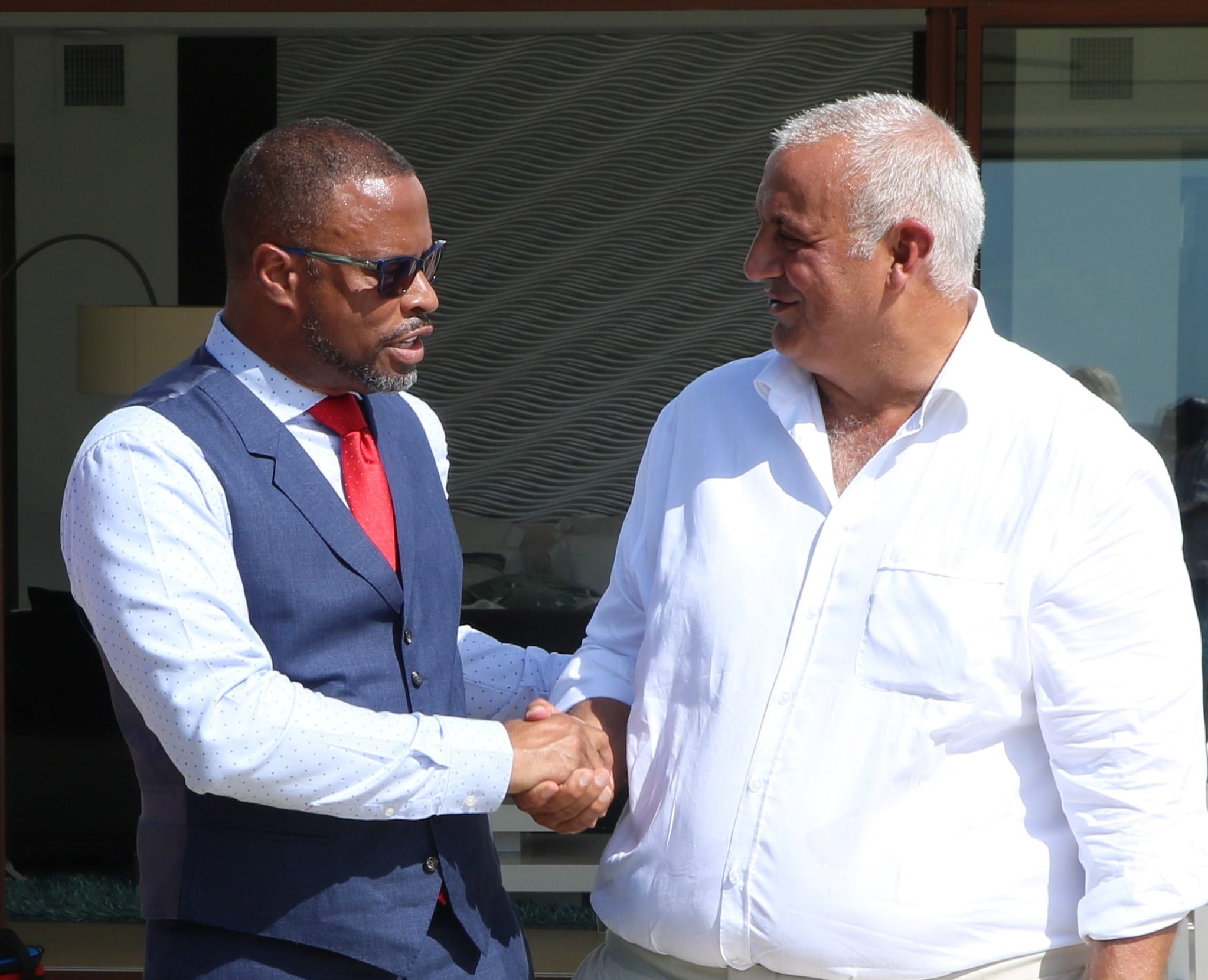 Hon. Mark Brantley, Premier of Nevis and Minister of Tourism and Foreign Investment in the Nevis Island Administration with Philippe Martinez, MSR Media producer and director on set in Nevis (February 2021)

NIA CHARLESTOWN NEVIS (September 01, 2021) – – The three movies filmed on Nevis by MSR Media over the past seven months have all been sold to distributors and will soon be available on international streaming services.

Under a three-year multi-film production deal with the Nevis Island Administration (NIA), UK-based boutique film and television production company, MSR Media has shot “One Year Off,” “Assailant,” and “A Week in Paradise” on the island.

Premier Hon. Mark Brantley, Minister of Tourism, Foreign Investment, and Minister with responsibility for Industry in the NIA, recently revealed that all of Nevis and the wider Federation will soon be able to see familiar faces and locations on their screens.

“All three movies should therefore be on our screens in short order. I look forward to the moment when all of Nevis, those at home and those abroad, and all of St. Kitts because so many Kittitians are featured in these movies as well and locations on St. Kitts are featured as well in these movies- that all of us as a federation can look at our screens, look at Netflix, look at Amazon, whatever streaming service, and see our people and our island and our country displayed in glorious colour.

“It will be I believe, an amazing experience for us all, and I can hear the voices now as people try to decipher and figure out who is that in the background, who’s that speaking, as we well and truly enter the movie business,” he said.

MSR Media producer Mr. Philippe Martinez and crew members traveled to the United Kingdom to film scenes from one of the movies there, and have recently returned to Nevis with the intention to start filming a fourth successive movie on the island in the coming weeks.

The Premier said he looks forward to the filming of “Christmas in the Caribbean” and continuing the partnership with MSR Media and other movie and television companies as the NIA endeavours to build out its film industry.

He pointed out that Nevis is now being featured in Entertainment trade publications and talked about in Hollywood circles alongside well-known Caribbean film destinations such as the Dominican Republic and Puerto Rico. This, he emphasised, can only augur well for the new local industry, the destination and its people.

“This is an example of taking and making something from nothing…If this process continues we believe that the island of Nevis can become an epicenter of film production right here in the Caribbean and perhaps in the world.

“The fact that we are only in it for seven months and already being mentioned with those big names in film is to me a mark of great success. I feel that all of us should be proud. I feel that as a government we have, despite the difficulties of COVID-19, despite the problems we’ve encountered, we’ve not stood still. We have continued to make every effort to create something to generate activity here on the island of Nevis… We feel that we are really on to something good and we continue to encourage [MSR Media’s] participation in the economic tapestry of the island of Nevis.”