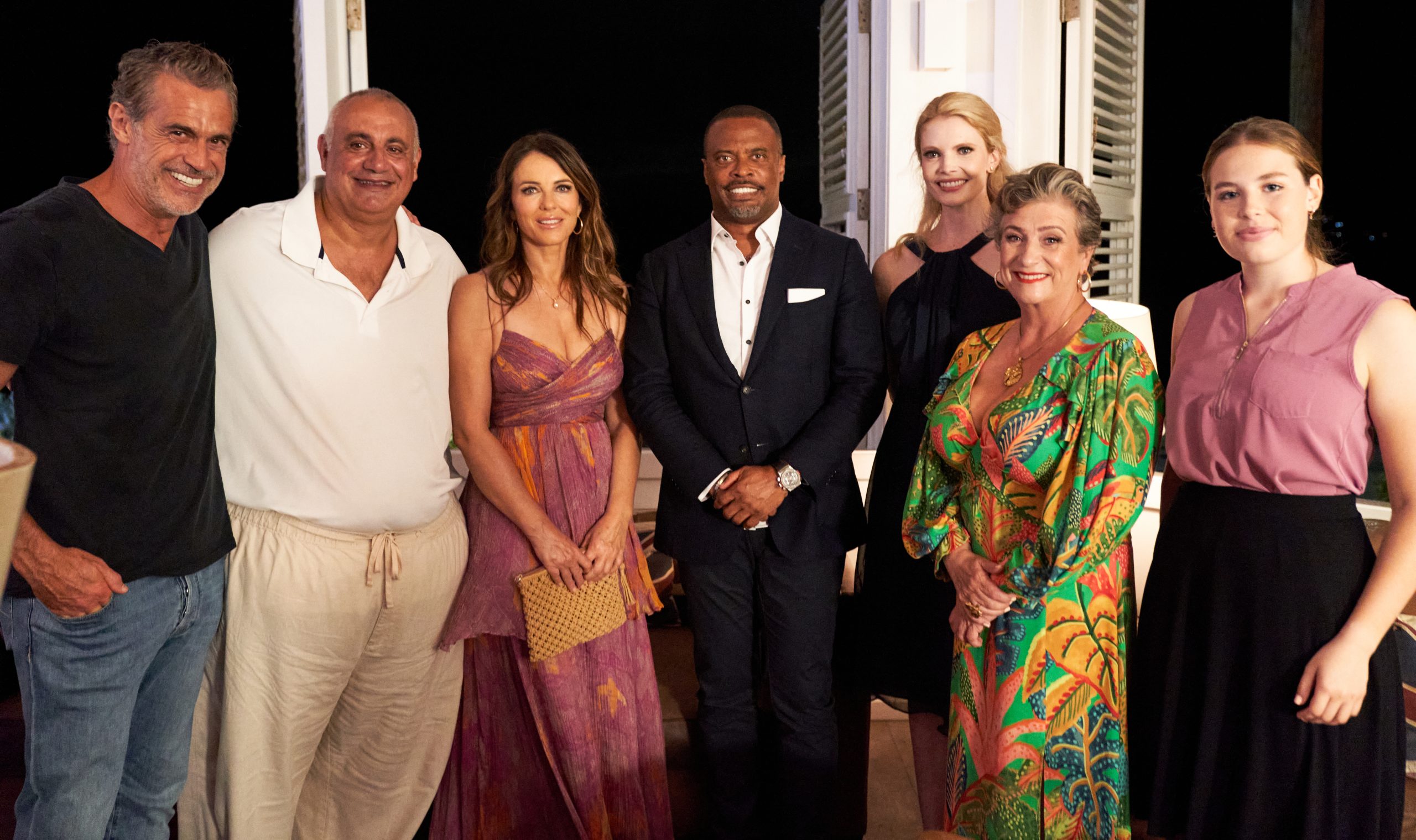 Hon. Mark Brantley, Premier of Nevis and Minister of Tourism, Foreign Investments and the Film Industry in the Nevis Island Administration (c) with (l-r) Edoardo Costa, Philippe Martinez, Elizabeth Hurley, Nathalie Cox, Caroline Quentin, and Hadar Cats, on the set of the MSR Media movie “Christmas in the Caribbean” being filmed on Nevis (November 01, 2021) photo by Sanne Gault and MSR Media

NIA CHARLESTOWN NEVIS (November 02, 2021)— It was “Lights! Camera! Action!” at the Gin Trap Private Club on Monday, November 01, 2021 as MSR Media officially began filming its fourth movie on the island of Nevis.

The film, “Christmas in the Caribbean”, is a romantic comedy starring Elizabeth Hurley, Nathalie Cox, Caroline Quentin, Edoardo Costa and Hadar Cats, and is directed by MSR’s own Philippe Martinez.

Hon. Mark Brantley, Premier of Nevis and Minister of Tourism, Foreign Investments and the Film Industry in the Nevis Island Administration (NIA), was invited to the set on Monday evening, where he personally welcomed the cast to Nevis.

“I welcome all of you to the island and say thank you. This journey with MSR started several months ago and we are now on our fourth movie. This one is more expansive because it has some filming on our sister island of St. Kitts. We like to say we are two islands, one paradise, so we offer two islands to you. We pray that you enjoy it while you’re here,” he said.

Ms. Hurley, who arrived on the island two weeks prior to filming said, “I’d like to say how much I love Nevis and how we’ve been very welcomed by everybody, particularly Mark. You’ve been very kind to us as a film company and it’s our absolute pleasure to be here and I hope we keep coming back.”

Martinez thanked the Premier for the hospitality extended by his administration and the people of Nevis.

“It’s film number four for MSR Media in Nevis and St. Kitts so we are thrilled Mark, for you hosting us as always and it’s a pleasure to have [the cast] doing this wonderful romantic comedy here.”

The Premier invited the actors to stay on after filming and enjoy the island, and to return for future visits.

MSR Media, a UK-based boutique film and TV production company signed a three-year multi-movie deal with the NIA in May 2021. Since putting down stakes in Nevis in January 2021, MSR Media has filmed three movies on the island, “One Year Off”, “Assailant”, and “A Week in Paradise”.

Premier Brantley said the launch of a film industry on Nevis and the wider Federation is a significant stride towards diversifying the tourism-dependent economy.

“In so doing we are creating real momentum for investment across the entire Federation of St Kitts and Nevis.”