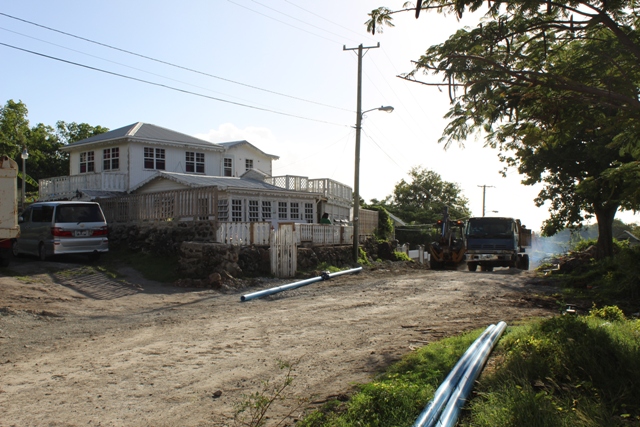 Nevis Water Department replacing water lines in the in the Craddock Road Rehabilitation Project on November 19, 2018

NIA CHARLESTOWN (November 19, 2018) — Work on the 5,600 feet Craddock Road Rehabilitation Project has commenced and Hon. Spencer Brand Minister of Communications and Works says the Nevis Island Administration (NIA) will do all it can to deliver a good product in 13 months.

Mr. Brand made the point when he delivered remarks at a recent town hall meeting at the St. Paul’s Anglican Church Hall in Charlestown, to discuss the major project with residents. Apart from drainage, he stated health was a key concern for embarking on the more than $5million project.

“It is not only a drainage issue but also a health concern because wherever you have stagnant water it becomes a health issue. That, more than anything else is tantamount on this project.

“We want to make sure that we get the water out of the area as quickly as possible. So that is foremost on our planning and the objective of this project,” he said.

The minister, who is also the Area Representative, urged residents to bear with the level of discomfort that would come with works throughout the project, called for patience and registered his apologies for the inconvenience.

“There will be some disruption. There will be some inconvenience and I want to implore the people of Craddock Road and the motorists in these areas to please bear with us as you would endure these interruptions. There would certainly be some dust and noise.

“I want to say to you up front that we are sorry for the disruption but at the end of the day I believe that you would be happy for the end product,” he said.

The project entails clearing of the sides, drainage improvements, excavation works, reconstruction of property boundary walls, asphalt works and at the end road markings and signage.

Mr. Brand noted his excitement for the project which he stated has been needed for many years. He said at the end of the project he believes the area and environs would be greatly enhanced.

Meantime, the minister called on property owners along Craddock Road for their support, citing that some level of land acquisition would be involved in the project.

“There would be some land acquisition, and we want to say to the property owners along Craddock Road to try and be as accommodating with us as possible. If we take a foot or a foot and a half please don’t be too mad at us and too angry at us.

“I am making the appeal now because it is going to happen but at the end of the day, I believe that this is an area where I believe needed to see this happen many, many years ago and it is now happening,” he said.

Mr. Brand acknowledged that he had agitated for the project, in keeping with a promise he had made to the people in the area in return for their confidence in him.

He described the area as being in desperate need of rehabilitation and said it is one of a number or similar road projects the NIA has undertaken on the island through the Ministry of Communication and Works executed by the Public Works Department.

Mr. Raoul Pemberton, Director of the PWD in his presentation underscored the need for cooperation from residents of Craddock Road. He said given the existing layout of construction of the area there would be quite a bit of disruption with property boundaries.

“There will be some disruption and we will be asking for your indulgence, your understanding, your patience and cooperation with us. We will try to limit the negative impact on the residents in and around the area,” he said.