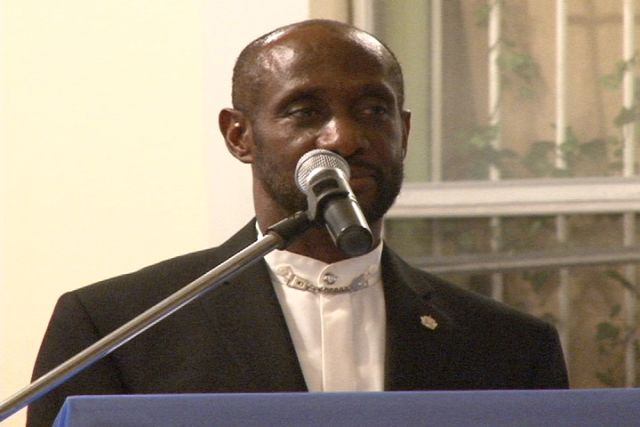 NIA CHARLESTOWN NEVIS (February 16, 2011) — Federal Minister with responsibility for National Security Hon. Sam Condor lauded the leadership of the Royal St. Christopher and Nevis Police Force, Nevis Division, for its move to honour junior officers  on an annual basis who performed their duties with distinction.

Mr. Condor was at the time delivering remarks at a ceremony to mark the 8th annual Police Constables Awards of the Nevis Police Division on February 12, 2011. The event was hosted by the Strategic Planning Group at the Occasions Conference Centre at Pinneys.

“I would want to applaud the Strategic Planning Group and the Nevis Divisional Office for the approach taken regarding responsible governance. You have built partnerships with various organisations in order to provide the necessary upgrade in safety of the community.

“You have enabled your officers to better perform their duties by assisting with improving their attitude and commitment to task. We appreciate the advancement that is being realised with limited human and other resources. I want to assure you that we are taking note as we undertake the review and reform of the entire Police Force,” he said.

The National Security Minister referred to the ceremony as an event which provided an opportunity to show appreciation for the remarkable work undertaken by Officers in often difficult and life threatening circumstances.

“We have come to publicly recognise [and] say thank you to some nine awardees, officers who have displayed an acute understanding of a commitment to their role in society and also to the expectation that our citizens and residents have of them.

“These officers have risen to the challenge of the Strategic Planning Group and the Force in general. The country owes them a debt of gratitude,” he said.

The Minister described the event as heart warming and one which gave hope in an environment where so much was peddled about the down side of police performance. Yet each day the public relied on and took for granted the professionalism, skills and expertise of the Police Officers to protect them, defend the democratic way of life in St Kitts and Nevis and to uphold the rule of law.

“I am persuaded though, that for the most part, our trust and confidence in the Forces are well founded. There are of course, lessons to be learnt along the way, lessons in vigilance, of technique, of communication etc.

“But I am genuinely hopeful, that as we move forward, there will be greater satisfaction vis-à-vis the performance of the Security Forces, as we work to address the ever increasing expectations of the public and the escalating criminal activities,” he said.

Meantime, the National Security Minister also had words of appreciation for Premier of Nevis and Minister with responsibility for Security in the Nevis Island Administration Hon. Joseph Parry, for his ability to initiate partnerships with the private sector and other entities which realised much needed assistance for the Police Officers stationed in Nevis.

He pointed to improvements which had resulted from the partnerships, among them the provision of barracks space and improvement in transportation.

The Minister also said that the Federal Government had recently passed into law the Interception Communications Act which was intended to enhance crime prevention and apprehension capabilities of the Police as St. Kitts and Nevis came to grips with the surge in criminal activity.

“This, together with the Close Circuit Television Project, when this is up and running, will put us on par with many nations in terms of technological investigation advancement. We want to strengthen the law enforcement hand, as we grapple with the violence and other illegal activities.

“I am grateful for all the assistance given to me by a wide cross section of the society, by the security forces and by Cabinet colleagues. I sincerely believe that we can do this. We can change this environment, working together and bringing all voices to the table,” he said.