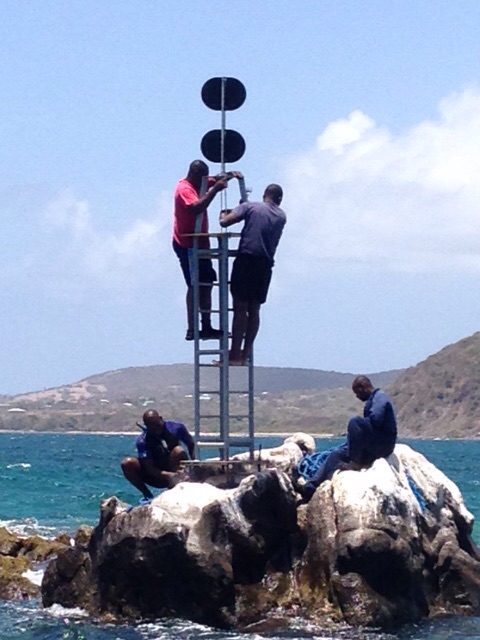 The frame for the navigational lighting on top of Cow and Calf rocks in the Narrows between St. Kitts and Nevis

Owner of Scuba Safari Ellis Chaderton informed the public of the installation of a navigation light on the Cow and Calf rocks by the Maritime Affairs St. Kitts, during an interview with the Department of Information on June 25, 2015. He said the lighting was funded by Barry Wilson, a boater who lives on Nevis

The Cow and Calf rocks are series of black rocks located in the middle of the Narrows between St. Kitts and Nevis.

Chaderton said the rocks are a navigational hazard to boaters due to their low visibility at nights therefore the new lighting would signify their location.

He also stated that the increase in boat traffic also played a significant role for the erection of navigational lighting, after an incident in which a boat collided with the rocks.

Permanent Secretary in Ministry of Agriculture and Fisheries Eric Evelyn said that his ministry is pleased with the initiative to erect the navigation lights because it not only made the waters safer for leisure vessels but for fishermen as well. He advised boaters to make proper use of the lighting.