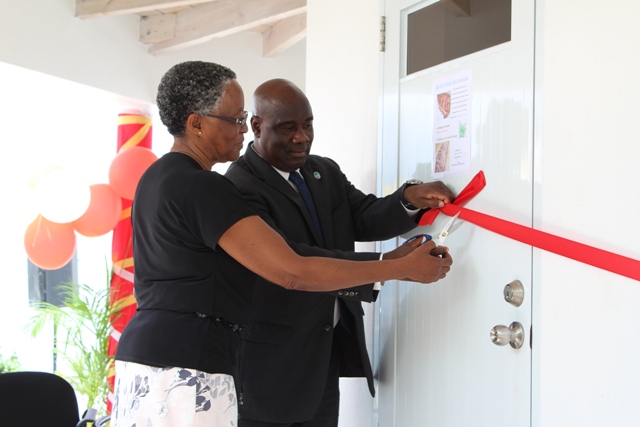 Hon. Alexis Jeffers, Deputy Premier of Nevis and Minister of Agriculture, cuts the ribbon to the new Processing Wing of the government-owned Abattoir at Prospect with Her Honour Hyleta Liburd, Deputy Governor General for Nevis at a commissioning ceremony on October 17, 2018

Mr. Elliott was at the time delivering remarks at a ceremony to commission the new processing wing at the abattoir at Prospect on October 17, 2018.

“The processing unit is very important to use here at the Agriculture Department and also to our farmers. Over the past few years we would have seen growth as it relates to processing through the abattoir. We would have seen increases up to three to five percent.

“The abattoir continues to grow…With the little that we had the abattoir was able to pay out almost 1/2million dollars to our farmers in 2017. In 2017 alone, the abattoir would have continued to produce over $200,000 in value of processed products and I do hope that with this new wing we are able to see a 10 to 15 percent increase in terms of the output for this unit,” he said.

“I am asking one and all to please do the maths and support your local…I am urging the hoteliers, the supermarkets and even individuals to continue to support local as we continue to push our buy-local campaign.

“We could only do it with your support and we continue to look forward for your support, your strength and your blessings,” he said.

Mr. Elliott also thanked Hon. Alexis Jeffers, Deputy Premier of Nevis and Minister of Agriculture, for honouring his commitment to see the project to fruition.

He said the journey to the official opening of the facility was not an easy one but the minister stood his ground and ensured that it became a reality.

Meantime, Mr. Garfield Griffin, Manager of the Abattoir Division, stated that the idea of the processing unit came about after experiencing congestion at the abattoir. Subsequently, the idea was presented to Mr. Jeffers and without hesitation decided to move the process forward.

“We had a ground breaking ceremony in January 2016. Shortly after that construction commenced and we were able to complete construction early 2017.

“Just after that there was a bit of delay. We had some difficulties procuring equipment and some other stuff but I am quite happy today that we are commencing the opening of this new processing wing. I am really excited and I am really happy for this new wing,” he said.

Mr. Griffin thanked Minister Jeffers for his unwavering commitment and drive to see the project through.

He also thanked the hoteliers, supermarkets and the public who have been supporting the abattoir, as well as his staff.

Other remarks were made by Hon. Alexis Jeffers; Mr.  Keithley Amory, former Director of Agriculture and Mr. Richard Lupinacci, Owner of the Hermitage Plantation Inn. Pastor Wayne Maynard delivered the invocation and Mr. Huey Sargeant, Permanent Secretary in the Ministry of Agriculture served as chairman.

Among those present at the ceremony were Her Honour Hyleta Liburd, Deputy Governor General for Nevis and members of the NIA Cabinet led by Hon. Mark Brantley, Premier of Nevis.