(l-r) Supervisor of Security at the Nevis Air and Sea Ports Authority (NASPA) Simeon Prentice , Deputy Premier and Minister of Tourism in the Nevis Island Administration Hon. Mark Brantley and Chairman of NASPA Colin Dore at the Long Point Pier with Super Yacht CLAN VIII Valletta on April 03, 2014
NIA Charlestown Nevis (april 07, 2014) — The Nevis Air and Sea Port Authority (NASPA) on April 03, 2014, hosted a test run ahead of the implementation of a new initiative at the Long Point Port, which would supply Super Yachts which traverse the Caribbean with a refuelling facility on Nevis.
CLAN VIII Valletta, the first Super Yacht to participate in the test run, arrived at the Long Point Pier and was refuelled by Delta Petroleum Ltd. Chairman of the NASPA Board of Directors, Colin Dore who was on hand to witness the event spoke to the Department of Information about the purpose of the new initiative and outlined the Authority’s expectations for the venture.
“A couple of months ago, NASPA started looking at the possibility of refueling yachts at Long Point. There is an upsurge now in yacht tourism within the Federation. There is Christophe Harbour coming on stream shortly and the Marina at Cades Bay, Tamarind Cove, coming on stream. We are trying to position ourselves to capitalize on whatever spin-off there will be from those activities. Today is meant to be the test to see if we are ready to accommodate that type of traffic.
“It is our intention at NASPA, very shortly, to install our own bulk station within the port and so, we are hoping that we could look at today’s activity to determine what we need to do as an Authority, so that we can fully capitalize on the spin-off of the development activities especially in yacht tourism,” he said.
Meantime, Deputy Premier and Minister of Tourism in the Nevis Island Administration (NIA), Hon. Mark Brantley, who also witnessed the test run activity, also welcomed the vessel and explained the importance of this new initiative to the island’s Tourism Sector. 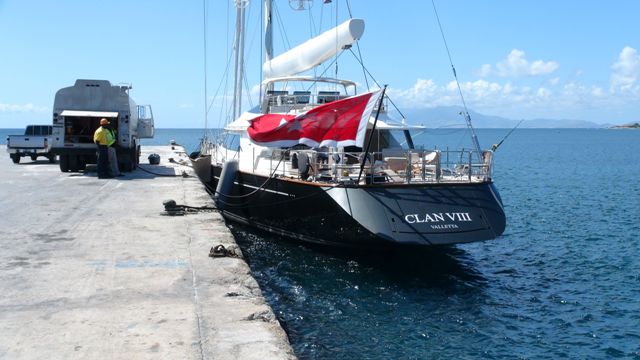 “It is yet another indication of the economic diversification that we are seeing in the Tourism Sector, the tourism industry and in the economy generally here. I am very happy to be here with the officials from NASPA and look forward to this being a regular event for NASPA and for the island of Nevis and for the tourism industry.
“I am hopeful that this goes smoothly, so that in the future we can have super yachts such as this coming right here, getting their fuel, getting their provisioning and being able to move on. I want to commend Colin Dore and his entire team at NASPA because they continue to try and find innovative ways to help us advance the economy of Nevis,” he said.
Also present at the refuelling test run was NASPA’s Supervisor of Security Simeon Prentice, who assured Minister Brantley and the public that the Authority would ensure that security remained a top priority and as such all safety protocols would be observed with the new refuelling initiative.