Mr. Liburd said contrary to public thinking, the former NIA had left no funds to see the project to fruition but had instead wasted the $6 million funding it had secured from the Sugar Industry Diversification Fund (SIDF) for the project.

“Those estimates were done using the same drawings used by the current contractor.  The drawings were prepared by the firm Schroter and Associates out of Jamaica and paid for, I am told, by my Permanent Secretary, by the NIA,” he said.

Even more alarming Mr. Liburd stated, was the realisation that the then Administration had paid the contractor half the contracted sum of US $1,433,795.50 or EC $3,922,649.20, before anything was done on the project. 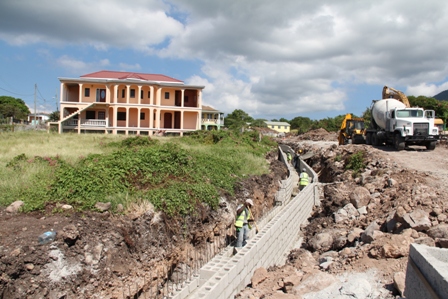 On February 5th, 2013, he said he learnt from Permanent Secretary for his Ministry Mr. Ernie Stapleton during a meeting with the Permanent Secretary in the Ministry of Finance Mr. Laurie Lawrence on the way forward for financing the project among other things that there had been no financial arrangements left in place by the previous Administration to fund the Hamilton Road project.

“I vividly recalled when I asked Mr. Lawrence what provisions had been made to fund the remainder of the project and his response to me was ‘There were none’. So I said ‘Are you serious? You telling me no money was set aside to finish this project? What happened to the six million that they said came from SIDF?’ and I was told some went to cover 50 per cent advance, another two million went to purchase the National piling stockpile at Long point and the rest was used to pay down some debts…

“So I asked the Permanent Secretary in Finance, if there were any other funds available in the budget to complete the project; his response to me was ‘No,’” he explained.

According to Mr. Liburd, he also learnt that the NIA owed that same company EC $1.4 million which had been incurred during the construction of the drag strip and other projects and as such a sum of  EC $500,000 was paid to them just prior to the January 2013 elections.

The company was also in possession of 50.38 acres of crown lands at Maddens which was being held as collateral on an EC $10 million loan from that same contractor. He said he was also informed that every time payments were late the contractor threatened to sell the lands.

Meantime, he noted that the new NIA had sought to negotiate with the contractor in an effort to reduce the scope of works. 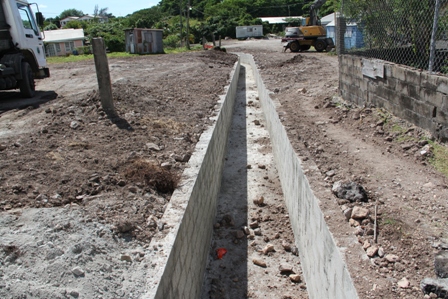 “The People’s Government [Concerned Citizens Movement – led NIA] then sort to negotiate with the contractor to reduce the scope of works to a point where we could pay until such time as we secure the financing to finish the job.

“Mr. President, the Cabinet had discussions with representatives for the contractor and we settled on a tentative framework for moving forward,” he said.

Shortly after those discussions, Mr. Liburd who is also the Minister responsible for Public Utilities stated that he was informed by the Manager of the Water Department that the contractor would no longer facilitate the excavation to lay new water mains along Government Road as initially planned and agreed to but was not written into the contract.

He said they got some local heavy equipment to do the excavation work and the Water Department put the water lines in place at the end of which the contractors were then asked to continue the work.