The cheque was presented to the Co-operative’s President Mr. Winston Pinney by Counsel and Deputy Head of Mission at the Embassy of Japan in Trinidad and Tobago Mr. Kiyoshi Kateuchi at a signing ceremony to the Ministry of Agriculture’s Conference Room at Prospect.

Minister of Agriculture in the Nevis Island Administration (NIA) Hon. Robelto Hector was present at the ceremony and in remarks thanked the Government of Japan for its invaluable assistance to the cotton farmers of Nevis.

“I want to thank you at this time when farmers find it a difficult time in attracting  loan funds, a time when climate change, global warming are some things that we have to grapple with…we have had a long and established relationship with the Japanese Government and one that I would dare say we would continue,” he said.

Mr. Hector also underscored the significance of cotton as an important foreign exchange earner for the island.

“The issue of cotton production must always be looked along the same lines as we speak of foreign exchange and as a small country, we want to make sure that we produce something that can help with our balance of trade,” he said. 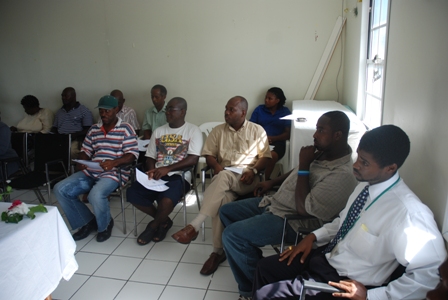 The Minister praised the cotton farmers for their decision to become a registered cooperative society and urged other groups whose focuses was also on agricultural production to do the same.  He reminded them that, that type of organisation was one avenue through which Nevis had developed over the years.

Mr. Hector also told the Department of Agriculture officials that he held them responsible for the progress on the grant fund.

“I am not satisfied until I see cotton in St. Kitts and I want you to find strategic means to get cotton planted in St, Kitts.

“I would say to you that when we would have done that, I would feel that we would have taken that other important stride in the vision and direction of cotton production,” he said.

The programme’s focus, he said, was on deficiencies and needs in the area of human security, an area in which the Government of Japan had placed high regard to address worldwide.

“I also think that the implementation of this project will contribute significantly to improve the Nevis economy,” he said.

The Japan Government Official regarded the cooperation between his country and Nevis as necessary given the number of global issues faced in today’s world among them climate change and the economic down turn.

“With regard to climate change, my country understands the urgency with which this issue must be addressed by each country. As such Japan has pledged to reduce its emissions by 25 percent by 2020 and it is considering including its financial and technical assistance to European countries…

“I hope that Japan and St. Kitts and Nevis will share a greater responsibility in coping with climate change in the future both laterally and bilaterally,” he said.

Mr. Kateuchi reminded that St. Kitts and Nevis had shared friendly relations and the ceremony showed how bilateral relations were built not only through intergovernmental interaction but also through cooperative efforts on a community based grass roots level.