Director of the Nevis Disaster Management Department Lester Blackett at a launching ceremony for the Nevis Disaster Management Department Application at its Emergency Operations Centre in Long Point on July 22, 2014,
NIA Charlestown Nevis (July 24, 2014) — The Nevis Disaster Management Department (NDMD) launched an Application “app” on July 22, 2014, at a launching ceremony at its Emergency Operations Centre (EOC) at Long Point.
While delivering remarks at the ceremony, Director of the NDMD, Lester Blackett explained that the application, which was sponsored by Caribbean Cable Communications (CCC), was the first initiative of its kind offered to persons by a government department.
“It’s a cutting-edge tool. It’s the first in St. Kitts/Nevis, so that should tell you how cutting edge it is. Nobody else has done it before in the government departments. The idea about the app comes as an extension of the website on our Facebook and our Twitter page…We wanted to find a way of being able to provide information to persons on the go. In other words, if you are at home, if you are in church, if you are at play, if you are at work, you should be able to access information with respect to disaster management.
“The whole purpose about it is to be able to give you the opportunity, you the general public not just in St. Kitts and Nevis but throughout the Caribbean and throughout the world because a number of the pages for the app don’t just apply to St. Kitts and Nevis, it applies to the Caribbean and indeed to the world. So it gives you the opportunity to get information specific about Nevis, some information about St Kitts and the Caribbean,” he said.
Blackett explained that the information on the mobile included but was not limited to information about disasters and also provided persons with the opportunity to access radio stations. 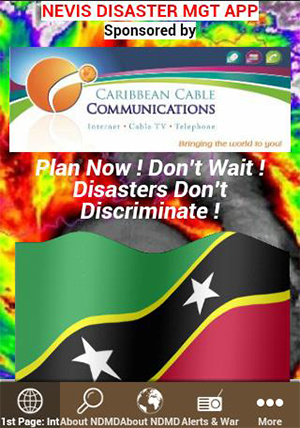 “You need to be able to have information you need to be able to access it, not just textual but graphical, animated, whether its satellite image or radar image. You need to be able to report to us…You can, on this app, send us an email directly but not only that. If you want to get on VON radio station…you can actually listen to the radio station on your telephone from the app,” he said.
During his presentation Blackett stated that the app at present was only available to the public through the URL but persons would be able to download the application for free at the end of July.
The application offered persons the option of accessing information about the latest natural occurrences and the ability to contact the NDMD via email in case of emergency. Blackett explained that although the app was still in the editing phase, more information would be provided accordingly.
The ceremony which was chaired by Director of the Department of Information Huey Sargeant also had remarks given by Premier of Nevis and Minister responsible for Disaster Management Hon. Vance Amory who officially launched the website application, Mario Phillip, Representative for Caribbean Cable Communications and Telca Wallace of the National Emergency Management Agency (NEMA).