A rain band from Tropical Storm Isaac covers Nevis on Thursday afternoon (August 23, 2012), accompanied by heavy rains and gusty winds
NIA CHARLESTOWN NEVIS (AUGUST 23, 2012) — Director of the Nevis Disaster Management Department (NDMD) Mr. Lester Blackett continued to urge persons on Nevis to remain in a state of alertness with as the  2012 Atlantic Hurricane Season peaked, a time when heightened activity was expected.
Mr. Blackett’s advice came on August 23rd 2012 in an interview with the Department of Information, during the passage of Tropical Storm Isaac.

“We want to take the opportunity to remind persons however, that we are in the peak of the hurricane season, that is the statistical peak, where normally you get much more activity. That activity starts now and goes down towards the end of September.

“So we are asking that the general public to be aware and cognisant of their need to be informed at all times of the weather conditions and especially the advisories that are put out by various agencies, including the Nevis Disaster Management Department, our website http://www.nevisdm.com/ , as well as the radio stations,” he said.

Mr. Blackett explained that even as the island continued to feel the effects of Isaac, as the system churned its way through the Caribbean Sea, another tropical disturbance which followed it in the Atlantic Ocean had been upgraded to Tropical Storm Joyce on Thursday but had passed north of the island chain.

Notwithstanding, he warned that the track was just a forecast that could change and asked all to take note and monitor the systems. He also spoke to a new area of disturbance making its way through the Atlantic Ocean.

“There is also another tropical system which is coming off Africa I think a day or two old. The exact track has not been well defined yet and you are also asked to be aware of that and any other systems that come off of Africa. 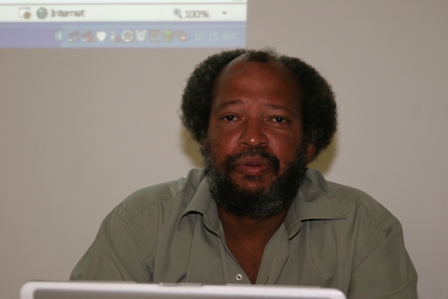 “They [tropical cyclones] can also be the production of a system in the Caribbean region as well. So not only do you look towards Africa but even within the Caribbean region or just east of us. So it is important that at least on a daily basis you bring yourself up to speed in terms of what is happening,” he said.

Meantime, Mr. Blackett reminded that there were a number of public shelters available to persons who had no other safe haven, in the event of inclement weather and spoke to their availability. He said a list of the shelters was available on the Department’s website.

“The public shelters are for those who are not able to have a secondary shelter belonging to somebody in their family or friend and as such the shelters will be opened and the announcements will be made on radio and on the internet.

“The opening of a shelter does not necessarily depend on a hurricane passing because it depends on the proximity of the hurricane and the expected impact on Nevis,” he said.

The NDMD Director also addressed the importance of pre assembled disaster kits and urged those who did not have one to compile one.

“If you are not sure what is to be included in the disaster kit, our website gives you that information as well as websites such as NOAA and SKNVibes and some of those other local internet sites. 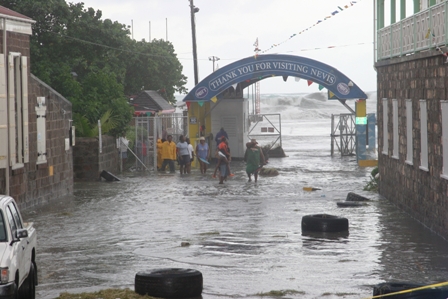 “So if you are not sure what your kit should be check those sites out. If you want to pay us [NDMD] at visit at Long Point you can do so. We have a number of brochures we can give to you not only covering hurricanes but earthquakes, floods and other such events,” he said.
Another critical issue Mr. Blackett spoke of was that of dumping debris in the island’s waterways (ghauts). He said that practise had posed serious problems in recent times.

“We are appealing to the general public not to put debris… into the ghauts because… it creates a problem at that point. Downstream it could create a clog and as a result it could cause overtopping of culverts and bridges.

“So wherever you are, if you see that is being done, kindly report it either to the Planning Unit or to the Disaster Management Office at 469-1423. We would appreciate the cooperation of the general public,” he said.