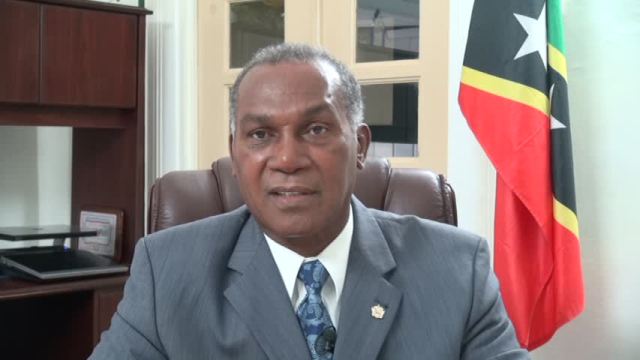 Premier of Nevis and Minister of Education Hon. Vance Amory
CHARLESTOWN NEVIS (SEPTEMBER 14, 2015) — Premier of Nevis and Minister of Education Mr. Vance Amory, recently announced the Caribbean Secondary Education Certificate (CSEC) Examination results, 2015, for students of the three High Schools in Nevis. These schools are the Charlestown Secondary School (CSS), the Gingerland Secondary School (GSS) and the Nevis International Secondary School (NISS).
Additionally, the Caribbean Advance Proficiency Examination (CAPE) results for the students of the Nevis Sixth Form College were also released. These examinations were done over the period of March – June 2015.
Mr. Amory reported that the CSEC Examinations had 1057 subject entries of which only 1034 were actually written resulting in 839 passes which led to 81 percent pass rate in Nevis, this year.
On the other hand, the CAPE Unit entries for this year were 621 of which only 588 Units were written, resulting in a total of 479 unit passes. This led to an 81 percentage pass rate for the CAPE Examination this year, for Nevis.
Comparatively, the two government schools combined, gained 82 percent pass rate with GSS showing an increase from 80 percent to 84 percent while the CSS increased from 77 percent to 81 percent.
Similarly, the Nevis Sixth Form showed a slight improvement from 79 percent to 81 percent. Conversely, the NISS, registered not only a decrease in the number of students writing the CSEC Examination but the number of subjects written. Also reflected in the report was a decrease in their pass rate to 45 percent as compared to last year’s 78 percent.
Throughout the schools, the highest individual Units attempted at the Sixth Form level over the two year period was 10, followed by the GSS attempting 11 and CSS attempting 15 individual subjects. The NISS, on the other hand, attempted eight individual subjects.
The report also revealed that one of the highlights of this year’s results has been the percentage increase in the Mathematics performance in both government high schools – 13 percent and 14 percent increase for CSS and GSS respectively. English A also registered marginal improvements for both Secondary Schools.
In Mr. Amory’s address on the CSEC and CAPE Examination results, he conveyed that he was heartened by the results of the island’s children in this year’s examination. He expressed his awareness of the challenges that they would have encountered in the school’s year and applauded them for their ability to achieve excellence even under those severe conditions.
The Premier and Minister of Education also congratulated the teaching fraternity of both High Schools. He intimated his awareness of the challenges faced by the NISS and expressed hope that they could overcome them in the new school year.
Mr. Amory, continued his message by referring to the large projects undertaken by the Administration, chiefly the refurbishment of the government owned schools on Nevis, in an effort to ensure that students have a comfortable environment to attend school and undertake their studies.
He further appealed to the students, to look on the government’s investment in education, as an investment in them and as such treat the school, furniture and environment with respect as it could only lead to their benefit and the benefit of the people of Nevis.
The Premier and Minister of Education, also admonished the parents to instruct, advise and guide the students to take care of the premises by not vandalizing or destroying the furniture.
Mr. Amory ended on a motivational note, by imploring the students to see education and the pursuits of education as their primary focus. He assured them that the government and the teachers are in support of them and the teachers likewise will be supported by the government in their quest to get the best for and out of the children of Nevis.