“The Ministry with the largest Current allocation is the Ministry of Finance with $58.90 million or 47.24 percent of the Budget. The deviation from the 2012 budget is very minimal at about 1.00 percent, even with the inclusion of Trade, Small Enterprise, Consumer Affairs and Supply Office as Departments within the Ministry.

“This resulted from a significant reduction in debt servicing of $9.60 million, reflecting the terms of the restructuring arrangement,” he said.

Mr. Amory also stated that the Ministry of Education had the most notable increase in its budgetary allocation compared to the 2012 budget which moved from $16.09 million to $19.55 million.

The Ministry of Social Development also received an increased allocation from 6.55 million; a 12.27 percent increase over the previous budget. The increase reflected more grants and contributions to the Nevis Cultural Development Foundation and the Nevis Performing Arts Centre.

Mr. Amory said the increase supported his Administration’s commitment to enhance the development of arts on the island.

The remaining Ministries in the NIA experienced minimal changes to their budget allocations the Finance Minister noted.

Mr. Amory further explained that his Administration’s commitment to reducing the Budget’s current deficit of 2012 was strengthened by their agreement as a team to take a 10 percent cut in salary.

“We recognise that we have to set the tone for fiscal sustainability and have not hesitated to take this measure. On the other hand, there is an increase in the allocation of resources to the Ministry of Education over the budget and the actual of 2012 in order to provide funds for needed graduate teachers. 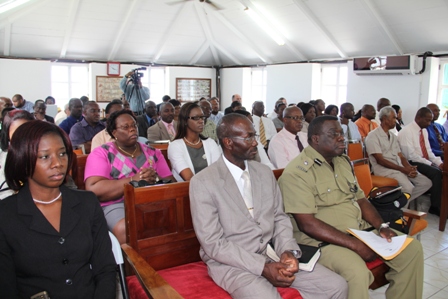 The Finance Minister stated that with this fiscal stance his Administration, the Budget’s Current deficit was expected to move from $9.62 million in 2012 to $1.67 million in 2013.

“Against the backdrop of higher Capital investments, the total budget deficit balance is set to widen from the actual of $15.78 million in 2012 to the budget of $21.99 million in 2013,” he said.

The House of Assembly adjourned almost three hours after Mr. Amory began his delivery of the 2013 Budget. Debate on the Budget is expected to commence on April 29 through to April 30 when the Nevis Island Assembly resumes its sitting.