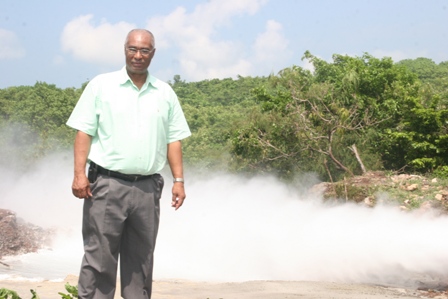 Hon. Joseph Parry during a visit to geothermal well in 2008 with proof of geothermal energy in the background at Spring Hill (file photo)
NIA CHARLESTOWN NEVIS (January18, 2013) — The Nevis Island Government is now free to pursue the development of geothermal energy by its own means. Premier of Nevis Hon. Joseph Parry made the announcement on January 18, 2013, two days after a High Court ruling gave the Administration the green light to do so.

Mr. Parry told the Department of Information that the Court ruled that West Indies Power, a company that had been contracted by the Administration to explore and develop geothermal energy on the island could no longer fulfil its end of the agreement.

“Two days ago the Court ruled that West Indies Power was in no position to meet its obligations. West Indies Power is a company that helped to develop geothermal energy on Nevis to a stage where it is proven that there is energy available for commercial use.

Mr. Parry expressed satisfaction with the Court’s ruling on the matter and informed that the Administration had already attracted other parties interested in the development of renewable energy on the island. 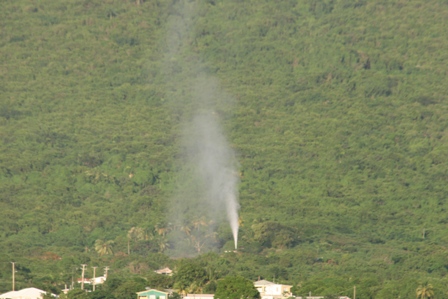 “I am very pleased with the Court’s ruling and I want to tell the people of Nevis that the Import Export Bank and other parties are interested in working with us. So we are now free to move forward with the development of geothermal power,” he said.

The Nevis Island had Administration led by Premier Hon. Joseph Parry due to rising prices in the world market was prompted to explore alternative energy sources.
West Indies Power was granted a licence to explore in 2007 and later on April 29, 2009 a geothermal contract was signed simultaneously with a Power Purchase Agreement with the Nevis Electricity Company ltd. the sole supplier of energy on Nevis.