CHARLESTOWN NEVIS (December 02, 2010) — The Nevis Island Administration (NIA) under the leadership of Premier of Nevis Hon. Joseph Parry, received commendations on Wednesday for what was described by St. James Area Representative, Attorney General and Federal Minister of Legal Affairs and Justice Hon. Patrice Nisbett, as its sustained investment in the island’s youth.

Mr. Nisbett gave praise and gave thanks moments before he broke ground at an official ceremony to mark the start of construction of just under $1million modern Community Centre/Hurricane Shelter at Combermere in the Parish of St. James.

The facility which will be constructed by Levis Construction owned by Mr. Livingston Mills in the next six months and on completion will serve the people of Camps, Liburd Hill, Scarborough, Barnaby, Potworks, Mount Lilly and Rawlins Pasture.

“I want to say thank you to this Administration for presenting this gift at this season when we celebrate joy, happiness and the other good things of life. I believe the people of Combermere, Camps, Barnaby Liburd Hill Potworks are indeed grateful for the Nevis Island Administration, in investing in this community centre here at Combermere,” he said. 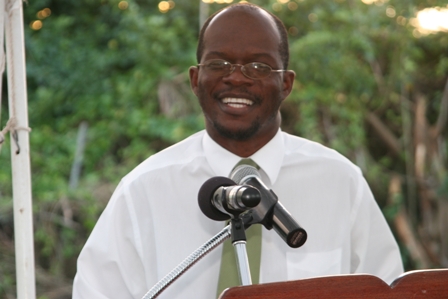 The Area Representative used the opportunity to encourage members of the community to promote activities and programmes that would inspire the youth to become more involved in community work.

He said the youths should be made to feel that the centre would be youth friendly and therefore a facility where they could find mentors who would teach them about the challenges life offered, how to cope with them and be able to lead successful lives.

“It is through our youths that we can be assured of the continuance in the protection and promotion of model communities throughout Nevis. I therefore urge and implore the older men in this community to engage the young men in productive and competitive events, such as games and also in healthy debates.

“Additionally, in addressing the needs of our communities Mr. Daniel [Minister of Social Development] will certainly bring programmes that will add value to the lives of the people of this community. The elderly must be encouraged to come together to participate in health sessions and they may even come to the facility when it is built and enjoy a nice movie in the night,” he said. 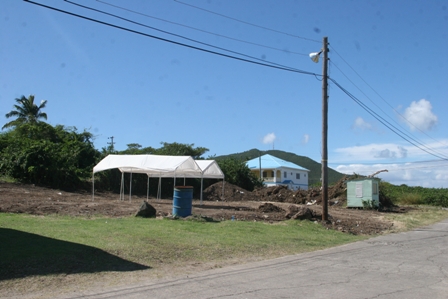 Site of the Combermere Community Centre which will serve the people of Camps, Liburd Hill, Scarborough, Barnaby, Potworks, Mount Lilly and Rawlins Pasture as a meeting place and a training and hurricane facility

According to Mr. Nisbett, that area of Nevis had never before received such a facility but reminded those at the ground breaking ceremony of the role played by pioneers of community work, who had paved the way for the emergence of the Centre.

“When I speak about pioneers, I speak about people like Earline Maynard, people like Marcella Jones, Nurse Jean Harris, Delroy Pinney, Althea Jones, Jacqueline France, Marian Jeffers, Miss Annie Mills and Steadroy Pemberton. They indeed have made a tremendous contribution towards the development of the community here at Combermere and St. James in general,” he said.

Meantime, Mr. Nisbett referred to the sitting NIA as a people oriented government that had embarked on an extensive programme of constructing and modernising community centres throughout Nevis.

He noted that once the Combermere Community Centre was constructed, it would symbolise the Administration’s profound contribution to the process of community development and its commitment, to ensure that the environment engendered for the people of Nevis was a just, inclusive and more cohesive society that worked for all the people of Nevis. 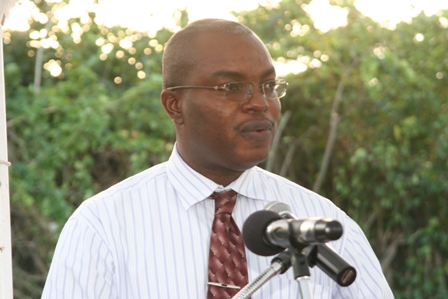 Permanent Secretary in the Ministry of Communications and Works on Nevis Mr. Ernie Stapleton

“In doing so, the Administration is seeking to strengthen our people’s capacity for participating in our fledgling democracy. The monies that will be spent, nearly $1million on this community facility and the others across Nevis, provides tangible evidence that the Government is committed to ensuring sustainable development through the provision of opportunities and facilities to empower and develop people in order that they can support themselves.

“I believe, when this community centre becomes a reality, it will represent countless opportunities which are available to our youth and will assist in addressing the many social ills in our society as well as bringing a fair measure of pride to the people of Combermere and surrounding areas,” he said.

Mr. Nisbett also expressed the view that in quick time, members of the community would be able to access a wide range of training, educational and self development activities through the Ministry of Community Development, as it continued to fulfil its role through the provision of empowering skills programmes in various areas.

He noted that it was incumbent on the various sectors of the community to play a vital role in ensuring when the facility came it is used and managed in a proper manner that would benefit all in the community. 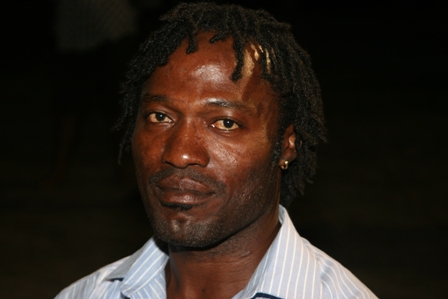 Meantime, Permanent Secretary in the Ministry of Communications and Works on Nevis Mr. Ernie Stapleton, in an overview of the project said the facility was designed as a meeting place, learning facility and as a hurricane shelter and disaster/emergency centre.

It will consist of a 5,077 sq. ft. masonry structure with a galvanised pitched roof over the auditorium, with the east and west wings covered with reinforced concrete.

“The building consists of one level [but] the center of the structure houses a multi-use auditorium which would seat 120 persons. The east wing houses a kitchen for training, library, longue and male and female bathrooms and the west wing houses the training rooms, computer room and bath room facilities,” he said.

In addition the grounds will be landscaped to facilitate parking and pedestrian movement and would be well lit and services on all sides.