CHARLESTOWN NEVIS (February 02, 2010) — The Government of Nevis will not rest until the island becomes a major player in the Financial Services Industry. Permanent Secretary in the Ministry of Finance Mr. Laurie Lawrence made the disclosure when he delivered remarks on Tuesday at the 2010 AML/CFT Awareness Seminar at the Occasions Entertainment Centre.

The annual event was hosted by the Nevis Financial Services Regulation and Supervision Department with the theme “Compliance Requirements – The Changing Landscape”. It was attended by over 80 participants the largest ever registration in its six-year history.

“I want to assure service providers that the government will not give up in its quest to make Nevis a major player in the Financial Services Industry. We believe that here is still potential for growth in the sector although success will require creativity and imagination,” he said.

Mr. Lawrence was of the view that tax planning services would be required as a result of the need for higher taxes in developed countries to meet the cost of infrastructure and the high expectations of their people. 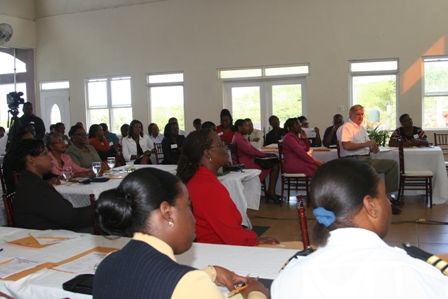 Participants at the Seminar

He also pointed to the global shift in wealth from Europe and North America to Asia and South America which will open up opportunities in new markets but noted that the market place would become more competitive.

“With the growth in technology, service providers will no longer focus on any one or two jurisdictions. They will spread their wings across the globe. Centres will continue to increase resulting in greater competition for the available opportunities. The more competitive it becomes the harder it is and the best jurisdictions will do well,” he said.

With this in mind, Mr. Lawrence said the Nevis Island Administration would continue to amend the island’s legislations to meet the needs of its customers but would not sacrifice quality.

“We will adhere to global regulatory and transparency standards, we will also aggressively pursue new markets. We are already working with the Federal Government to appoint honorary consuls in strategic areas across the globe to facilitate the processing of documents. We are also exploring the possibility of contracting out the Registry to a private entity that could upgrade the technology and make our service more competitive, in terms of speed and efficiency.

“We are also studying potential growth in areas such as insurance, intellectual property and ship registration to seek out opportunities. These are just some of the areas we are working on presently, to ensure the sustainability of this important sector. So we are not giving up, we are not going to throw in the towel so we are going to have to work harder,” he said.

Mr. Lawrence acknowledged that the NIA could not do it alone but necessitated the close working relationship it had shared with service providers on the island, to promote and develop the sector.

He told the participants that they had the direct experience and as such, the Administration would continue to solicit their views and advice as they forged ahead.