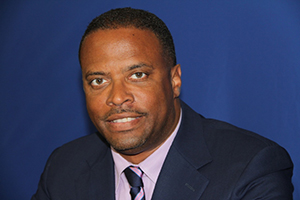 Deputy Premier of Nevis and Minister of Health Hon. Mark Brantley (file photo)
NIA CHARLESTOWN NEVIS (October 10, 2014) — Deputy Premier of Nevis and Minister of Health Hon. Mark Brantley, urged Nevisians to care and protect those who had mental health issues on the island and work toward becoming a kinder society.
Mr. Brantley made the comment in an address delivered on October 10, 2014 to mark the occasion of World Mental Health Day. The theme for the day was “Living with Schizophrenia.”
“As we go about this day then and the ensuing weeks and months, let us together care of those who have mental health issues. Let us protect them and let us vow together, to become a model society, where all have a place to live and grow and prosper without fear or discrimination. Let us work together to be the kinder, gentler society that we all envisage and hope for,” he said.
According to Mr. Brantley, while there was no way to prevent Schizophrenia, early diagnosis and treatment could help to control symptoms. It was for that reason he noted that education about the disease was of paramount importance.
“The focus of this year’s activities, therefore, will provide education about this chronic, severe and disabling brain disorder; campaign for equity for those affected by the disease and address the issues of stigma and discrimination directed at persons with schizophrenia.
“Worldwide, some 26 million persons are affected by this disease. In Nevis, schizophrenia represents one of the disorders recorded in our population and accounts for greater than 10 percent of over 600 cases recorded on the Mental Health Register,” he said.
During the month of October, the Mental Health Unit of the Department of Public Health, charged with the responsibility for the care and treatment of persons with schizophrenia, will provide greater insight into the disease. It will include tips for living a healthy lifestyle with schizophrenia which Mr. Brantley contended would be of assistance to the community.
“These tips are especially important to patients, families and caregivers who work as part of the community based mental health programme which is followed in Nevis, a model which is being increasingly adopted worldwide, with reduced focus on inpatient or long term treatment at psychiatric facilities.
The Health Minister stated that his Ministry had recognized there could be no good health without mental health and as such, continued to invest in the necessary areas related to mental health.
“We continue to invest in human resources in this area with a psychiatric nurse and psychiatrist who will soon join the mental health team here in Nevis. We also look forward to partnerships within the next few months with the St. Kitts/Nevis Drug Council and the Pan American Health Organization (PAHO) that will provide training to a number of health professionals in the area of mental health diagnosis and treatment as well.
“It is imperative that we continue to build capacity in this and all areas of mental health as these illnesses account for a great burden of disease in the population,” he said.
Mr. Brantley explained, that research conducted on Schizophrenia to date indicated that genetic predisposition, environmental stressors during the early stages of brain development and illegal drug use may be triggers that lead to the onset of the disease and stressed that on one in the population was immune to the disease.
Therefore, it was important for individuals with Schizophrenia and other mental health disorders to be treated with equity and respect and not become victims of stigma and discrimination.