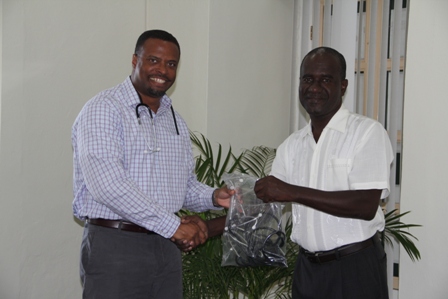 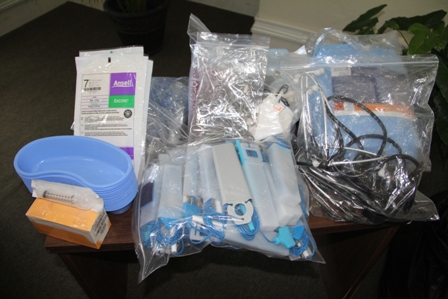 “It’s the kind of partnership where no matter the quantity, just the fact that people elsewhere see that Nevis is in a particular position where they can help and are prepared to help. This is not based on family, it is not based on friendship, it is really based on them seeing a need and them trying to satisfy that need and to look out for others and I think that really is the lesson,” he said.
The Health Minister also thanked the faith-based organisation for its continued commitment to health care on Nevis and to its people. He stated that the timely gift of supplies would assist the Ministry of Health in its quest to provide and improve the health care sector on the island.
“We are very thankful and whilst you say that this is not as much as have come in the past, we are still very grateful and we would like for you, very much, to record our appreciation to Dr. Bates and his team. We look forward to a long-term relationship with them [and] in any way that we can partner we would be delighted to do so,” he said.
Meantime, Pastor Morton, in brief remarks, spoke to the partnership forged with the faith-based organisation and its benefits to the people of Nevis since their first visit in 2008.
“When they came to Nevis, we set up some [medical] teams around the island, one in Gingerland, one in Jessups, one in Eden Brown and they had, I think, about 12 doctors with them. The following year they came back. I think [for] three consecutive years. Last year there were no medical teams but the medical supplies have been brought. 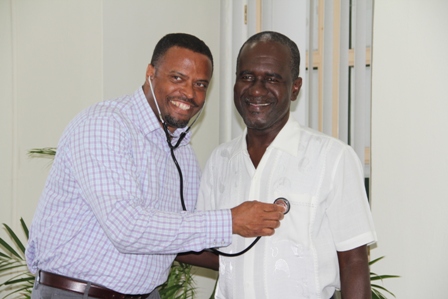 “What I observed is that, they had given to St. Kitts the value of what they told me was about $10 million in terms of supplies and so far, for the past three years since we have been receiving supplies from Global Faith Alliance, I think we are just about over $2 million in terms of supplies…
“I think last year or the year before they gave much more, in fact, we had to get a flat bed truck to go to St. Kitts to bring over all the supplies from St. Kitts and so we are very grateful for the supplies that have been received from Dr. Leman Bates, who is the head of Global Faith Alliance.
According to Pastor Morton, the Alliance also provides medical care and supplies in other parts of the world among them Asia and in particular Africa.