The Health Minister made the call when he delivered remarks at a Workshop on Depression hosted by the Nevis Community Mental Health Unit in conjunction with the Ministry of Health on Tuesday April 16, 2013 at the Red Cross conference room.

“Let us remove the stigma that is often associated with depression and mood disorders. Let us tell our men in particular, that it is ok to connect with their feelings and to seek counselling.

“In all this, the Church and other faith-based organisations are powerful weapons for change for this island. We ask for your partnership,” he said.

According to the Minister, in 2011 there were 476 clients recorded on the Mental Health Client Register, many of whom were diagnosed with mood illnesses including Depression. He also noted that there had been an increase in the number of individuals on Nevis who were diagnosed with Mood Disorder and that statistic was almost equivalent to the number of persons on the Diabetic and Hypertensive registers at the Public Health facilities. 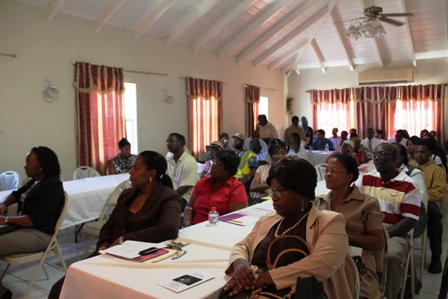 Mr. Brantley urged the workshop’s participants to also make mental health a priority of focus, since it was an area most of the faith-based organisations were already engaged in to some degree.

“Most if not all of you are already engaged in some degree through the provision of marital and bereavement counselling.

“The religious or spiritual leader also counsels the family of the sick, prays for guidance for the teen preparing for CXC exams as well as the ones exhibiting anti-social behaviours and the list goes on and on. All of these life situations can lead to mental health disorders including alcoholism, bipolar disorder, depression and any others of the 30 recorded illnesses diagnosed by the Mental Health Unit in 2011,” he said.
The Health Minister stated, therefore, that it was only fitting that the capacity of faith-based leaders to effectively manage or refer members who exhibited certain symptoms of mental illness be strengthened.

Mr. Brantley noted that it was the hope of the Ministry of Health on Nevis that the workshop would provide participants with the tools that would better place them to assist those affected by depression or other mental disorders. 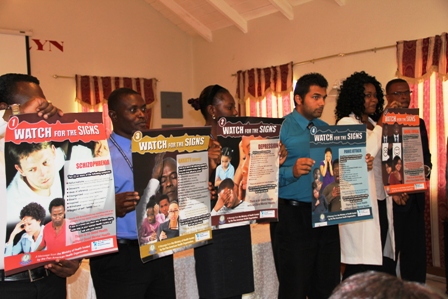 “We at the Ministry of Health encourage you to partner with us in this important endeavour which will undoubtedly assist us in our aim of improving the delivery of mental health care in the Nevisian Community and improving the quality of life for our loved ones,” he said.

The Health Minister also used the opportunity to register what he described as his heartfelt thanks to Psychiatrist Dr. Sharon Halliday who facilitated the workshop, Manager of the Nevis Mental Health Unit Nurse Meredith Amory-Field and the staff at the Unit for coordinating the workshop and for their continued hard work in the area of mental health.