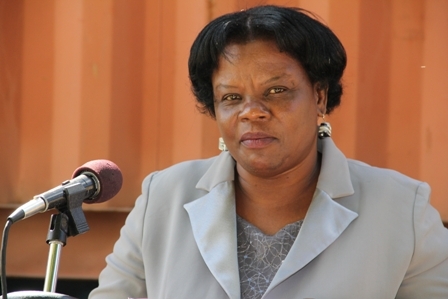 Director of the Development Projects Foundation Incorporated on Nevis Mrs. Myrthlyn Parry
NIA-CHARLESTOWN NEVIS (January 13, 2012) — The Development Projects Foundation Incorporated on Nevis has done it again. This time the humanitarian organisation’s Director Mrs Myrthlyn Parry, handed over another 40foot container to Deputy Premier and Minister of Health on Nevis Hon. Hensley Daniel, on January 12, 2012 at the Alexandra Hospital. The container was parked to capacity with medical supplies and equipment for use in every area of the island’s main health facility.

The donation came on the heels of another container load of medical supplies donated by another charitable organisation based in the USA. Director of the Development Projects Foundation Incorporated on Nevis Mrs. Myrthlyn Parry said the project would not have been possible in the absence of immense assistance from donors both locally and internationally.

“The container was donated by Hospital Sisters Mission Outreach, a charitable organisation in Springfield, Illinois, UAS. The Development Projects Foundation Inc. was introduced to this organisation by Mrs. Shereen Abdel-Meguid of the Mount Nevis Hotel and we were recommended to the organisation by Dr. Guilbert Daniel of Accent on Health in Washington, DC and Mr. Edmund Sadio of Century 21, Achievers Reality in Brooklyn, new York. 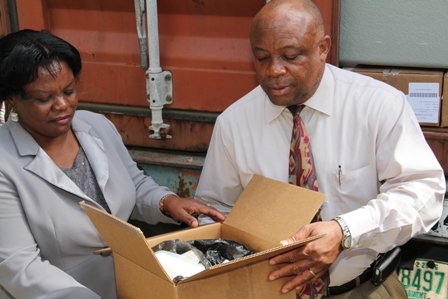 “The contents of the container are valued at US$112,369.57. Shipping and handling charges for this container amounted to EC$34, 735.56. The Development Projects Foundation Inc. embarked on a fund raising drive and invited individuals and businesses on Nevis to partner with us in this humanitarian effort because we are well aware that the Alexandra Hospital offers its services to everyone on the island of Nevis,” she explained.

Mrs. Parry referred to the response of her organisation’s fund raising drive as heart-warming and generous and pointed out that contributions also came from Nevisians who did not own businesses but donated to the cause generously. Some of those persons she said opted to remain anonymous but nonetheless she expressed gratitude to them along with all those who made the project a reality.

The other 40ft container with medical supplies and equipment which the Foundation handed over to the Ministry of Health in October 2011, for the Alexandra Hospital was donated by Global links, also a charitable organisation based in Pittsburgh, Pennsylvania. 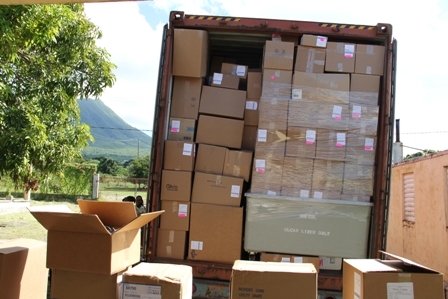 The contents of that container were valued at US$75, 212.68. The shipping and handling charges were paid for by Dr. Wayne Bossola and other friends of the people of Nevis.