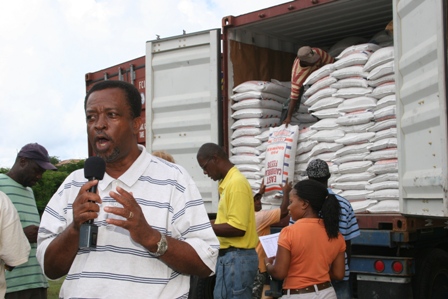 CHARLESTOWN NEVIS (June 11, 2010) — At least two pig farmers registered their satisfaction for free bags of pig feed from the Food and Agriculture Organisation (FAO) through the Ministry and Department of Agriculture on Nevis.

The feed was purchased by the Department of Agriculture through the FAO’s initiative on soaring food prices. The gift which was meant to stimulate pig farming was distributed at the Prospect Experimental Station. The distribution was supervised by Director of Agriculture on Nevis Mr. Keithley Amory and his staff on Friday.

Mr. Charles Bussue a lifelong small scale pig farmer who was on hand to benefit from the feed told the Department of Information he like other farmers felt gratified with the gesture.

“Indeed we are very thankful for the donation made by FAO. We also want to thank the Nevis Island Administration for organising this for the pig farmers on Nevis. At this extremely difficult time that we are all facing, I think any help would be a great help and this time I can tell you one bag, two bags or 15 bags, they are all very, very helpful to us the pig farmers on Nevis.

“I have been a pig farmer all my life, however, this is the first time I have been an actual recipient of such donations from the Agricultural Department that has been sent here by FAO and again I just want to stress I am extremely thankful for this help,” he said. 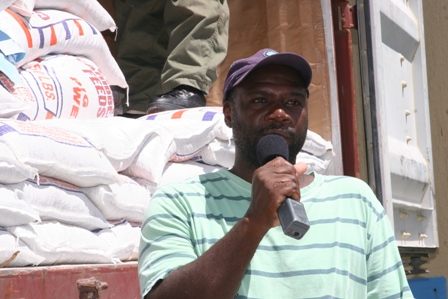 Owner and Manager of Webbes Pig Farm in Webbes Ground, Gingerland Mr. Sam Webbe, echoed similar sentiments. He was one of the large scale pig farmers who received the FAO sponsored pig feed.

“I must say I am indeed grateful for this gift that was presented to us here this morning from FAO through the Agriculture Department in Nevis. I must say how happy I am for being relieved of the cost of going to the Supply Office. This contribution would run us down for three weeks and I must say I am really happy. I am just really, really grateful for this contribution and on behalf of the other farmers, we just want to say thanks. I am a little overwhelmed this morning,” he said.

Meantime, Mr. Amory said they had expected to distribute about 750 bags of feed to some 100 pig farmers. He explained that Friday’s distribution was the continuation of the FAO funded programme which had commenced in 2009.

“This initiative had started early last year but because of some logistical problems we were not able to finalise it. So we are here today to finalise the distribution of the feed to the deserving pig farmers. 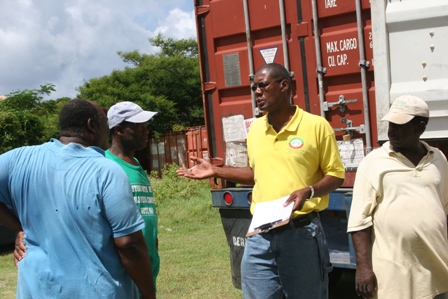 Director of Agriculture on Nevis Mr. Keithley Amory (second from left) speaks with Pig Farmers on hand to receive Food and Agriculture Organisation sponsored free pig feed through the department of Agriculture

This initiative was based on the collapse of the economies, so many farmers who were involved in pig production or livestock production had ceased to continue production because they felt that they could not afford to buy pig feed.

“The FAO decided that this initiative would help to stimulate and continue to encourage persons into pig production or even livestock production. So what they did was to give us some money and we are now here to distribute pig fed to these farmers so that they may continue to survive in these harsh economic times,” he said.