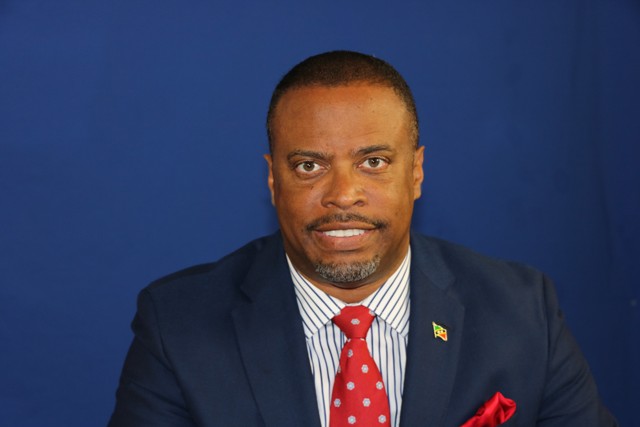 NIA CHARLESTOWN NEVIS (October 28, 2019) — Hon. Mark Brantley, Premier of Nevis, addressed the issue of climate change when he delivered the feature address at the 81st annual Convention of the Barbados Labour Party at Queens Park in Barbados on October 27, 2019.

The vexing issue was one of several matters Mr. Brantley described as ever increasing threats faced by the region.

“Climate change and the ravages of changing weather patterns giving rise to droughts in some months, floods in others and increasingly violent storms pose threats to our very existence. Climate change has been correctly identified as an existential threat to Barbados and to the Caribbean region.

“Moderate rises in ocean levels are likely to obliterate low lying coastal countries such as The Bahamas and small islands such as Anguilla, and others are likely to disappear altogether. Indeed much of our tourism infrastructure on which the Barbadian and much of the regional economy depends exists along our coasts, and will be the first to disappear when our oceans encroach.

“We need look no further than the devastation wrought by Hurricanes Maria and Irma in 2017 where our neighbours like Dominica, Antigua and Barbuda, Anguilla, St. Maarten, Puerto Rico and Cuba suffered devastating damage.

“Indeed so ferocious was Irma that it rendered the island of Barbuda uninhabitable for the first time in 350 years. Just this year Hurricane Dorian devastated The Bahamas leaving untold death and destruction in its wake.

“Financial damage and losses to our region in [the] last three years alone run to billions of dollars. These catastrophes are still fresh in our collective mind, and our hearts grow increasingly heavy each year at the suffering inflicted upon our region and our people. I remind us all that even as I speak to you today, the dreaded hurricane season is still not yet over.

“Here in Barbados you have had the stench of Sargassum along your coastlines just as in other countries of the Caribbean. I am told that the explosion of sargassum in our waters has everything to do with the increased warmth of our oceans caused by ever-increasing global temperatures.

“And lest we feel that climate change is only affecting us, the larger countries are now seeing hotter summers, warmer winters, unprecedented flooding and the ice caps continuing to melt. Just two days ago I was in Los Angeles, California, where forest fires continue to burn and the tragedy of devastating fires in the Amazon rainforest was played out on television screens across Barbados and the world.

“There are some who defy the clear evidence and still insist that climate change is a hoax. Many still see it as an intellectual conversation to be had in our universities and in our conferences. Many see it as an academic exercise for scientists and pundits to write papers on and give lectures about but we – you and I – know that we of Barbados and the Caribbean do not have the luxury of time.

“Barbados and our region cannot wait until others decide that climate change is real. By then we might no longer exist and our great Caribbean civilization would be wiped out, forcing us to become climate refugees in distant lands. We find ourselves standing on the front lines of a war we never asked for, a war we never started, a war to which we have not contributed to but a war we must nevertheless fight,” he said.

Mr. Brantley also spoke of the financial burdens the effects of climate change is costing the people of the Caribbean region.

“We all know that we do not contribute to the circumstances giving rise to climate change but yet we are the ones who suffer most from its harsh effects. In every sense the developed world is asking Barbados and the rest of us to cash a cheque we did not write and one we cannot afford to pay.

“When hurricanes come, we are tasked with rebuilding and rebuilding better but rebuilding costs money and where is that money to come from? With small populations and narrow tax bases, Barbados like the rest of us must seek international developmental assistance to rebuild, and to move our country and our people towards achieving the Sustainable Development Goals, and yet, the developed world says to Barbados and the rest of us that we are ineligible for concessionary loans or grants because we have been graduated to middle, upper middle and even high income countries.

“The measure employed by the international community is a sterile one of GDP [Gross Domestic Product] per capita. On that measure, The Bahamas is a wealthy country as is Barbados and my own St. Kitts and Nevis. But did GDP per capita help the people of Abaco when Hurricane Dorian touched down? Can we really speak of meaningful and sustainable development when all our gains can be wiped out in a few hours of wind and rain? What does middle income or high income country status mean when our vulnerabilities are so acute?” he asked.

Mr. Brantley expressed the view that the region must continue to find an alternative approach to the manner in which the Caribbean islands are categorised by the international community.

“Ladies and gentlemen, we have been advocating and must continue to advocate for a different approach to these forced graduations and their concomitant consequences. Our extreme vulnerabilities as Small Island Developing States, must be taken into account when eligibility for developmental assistance is being determined.

“Absent such considerations, our small nations will be forced into a never-ending cycle of borrowing, oftentimes at commercial rates which ultimately leads to the dreaded debt trap in which so many small nations find themselves.

“We well understand and commend Barbados for being on a similar downward trajectory but we know and recognize that the path back to fiscal health is fraught with difficulty and hardship, and yet the international community remains largely insensitive to our legitimate concerns.

“Barbados was among the many in the Caribbean and elsewhere which was blacklisted by the European Union. Perhaps in their desire to treat the independent status of small countries as mere fig leaves. Politicians and bureaucrats perched in Brussels are now seeking to dictate the tax policy of independent countries globally.

“The message now is do as we say or risk crippling reputational damage, and we know and must not tire of saying that these rules are disproportionately applied to the smallest and most vulnerable of states while powerful countries such as the United States are immune from the dictates of Brussels,” he said.

Mr. Brantley used the opportunity to point to the consequences Nevis faces with its financial services sector as a result of the decisions taken in Brussels.

“The evidence would suggest that business lost is now fleeing to states in the US such as Delaware and Nevada which are immune from the reach of the EU [European Union], the FATF [Financial Action Task Force], the OECD [Organisation for Economic Cooperation and Development] and others. There is my friends, no level playing field and no effort to ensure that all are required to play by the same rules,” he said.