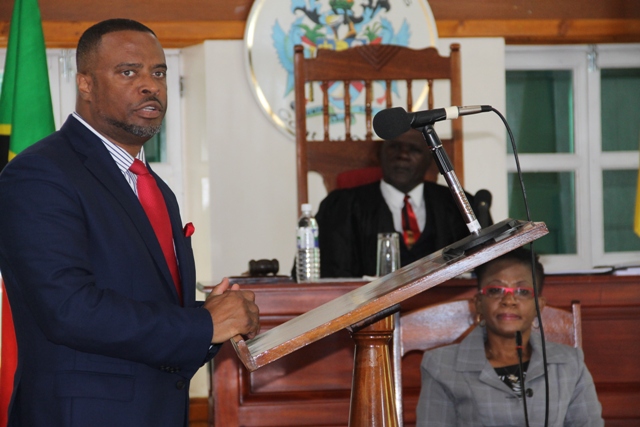 Premier of Nevis Hon. Mark Brantley delivering a statement at the Nevis Island Assembly on April 24, 2018 with Hon. Farrell Smithen, President of the Assembly and Ms. Myra Williams, Clerk of the Assembly looking on

NIA CHARLESTOWN NEVIS (April 24, 2018) — Hon. Mark Brantley, Premier of Nevis, is appealing to British nationals born in St. Kitts and Nevis and the rest of the Caribbean who are a part of the Windrush generation to take advantage of the British government’s recent move to grant them citizenship and compensation.

Mr. Brantley, who is also the Minister of Foreign Affairs in the Federation, made the call when he delivered a statement at a sitting of the Nevis Island Assembly on April 24, 2018.

“I believe that it has been a good week for the Caribbean and I would urge from this rostrum that those who are hearing would ensure that the word goes out and so all of our people, make sure, that they put themselves in a position to benefit from this new policy that we have been able to extract from the British Government,” he said.

They were able to garner the support of members of parliament and the press to highlight the plight of British subjects from the Caribbean who started arriving in Britain in 1948 and who had since 1973, found themselves facing deportation, denial of jobs, health care, denial of housing and re-entry for those who had travelled outside the United Kingdom.

Mr. Brantley, who was in London as the Minister of Foreign Affairs a week ago, said the public debate on the issue peaked then and St. Kitts and Nevis took leadership on the Windrush issue and with the high commissioners and the media’s assistance were able to arrive at a solution including fulsome apologies from the British government, through Prime Minister Theresa May, and from Home Secretary Amber Rudd.

“We were able to extract from them a compensation fund to ensure that those who have been disadvantaged by this policy would be compensated in full.

“In addition, I am pleased to announce that the Home Secretary’s office has now set up a website and has set up a dedicated team, so that individuals affected can have their citizenship processed for them and their children at no cost. So the ordinary ₤2,000 fee has been waived for the Windrush generation and their descendants,” he said.

Mr. Brantley explained that the British government has also taken steps to use evidence already in its possession to further assist them.

“We have also been able to extract, through the British Government, that they will now use evidence already in their possession… Often times when British nationals born here…sought to get regularised, they were told by the Home Office “You have to prove that you have been living here for 40 years.”

“Many of those people, naturally, did not have documentation. In fact, some would arrive on their parent’s passports. Their parents had long since died and they did not have the necessary documentation, the consequence of which is that they were being denied. Now, the Home Office has said they will use their own records – housing records, health records, school records – to assist in establishing the entitlement of Caribbean people to these benefits,” he said.

According to British press, the Windrush generation is a reference to the ship MV Empire Windrush which arrived in Britain in 1948 bringing workers from Jamaica, Trinidad and Tobago and other islands, in response to post World War II labour shortages in the United Kingdom.

Persons arriving there between 1948 and 1971 from Caribbean countries have been labelled the Windrush generation. The ship carried 492 passengers many of whom were children.

Mr. Brantley took the opportunity to record his appreciation to the leadership that St. Kitts and Nevis provided in dealing with the matter while in London.

“We were able to have audience with CNN, with Channel4, with BBC Radio, ANTV, BBC Scotland, Russia TV, Russia Today.