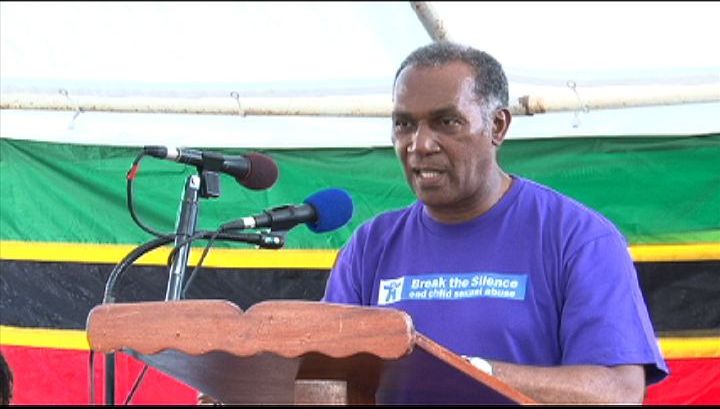 Premier of Nevis Hon. Vance Amory at the Child Abuse and Gender-Based Violence Rally at the Memorial Square in Charlestown on April 17, 2013
NIA CHARLESTOWN NEVIS (April 22, 2013) —Premier of Nevis Hon. Vance Amory,made a forceful pleato all responsible for the safety and wellbeing of the island’s childrenthat they should commit themselves to the task and break the silence which surrounded child sexual abuse.

Mr. Amory made the call when he delivered remarks at the launch of A Child Abuse and Gender-Based Violence Rally on April 17, 2013 at the Memorial Square in Charlestown. The event which will be conducted in other parts of the Caribbean, was hosted by the United States Embassy to Bridgetown and the Eastern Caribbean, the United Nations Children Fund (UNICEF) and the Caribbean Women’s Association (CARIWA) in collaboration with the Ministry of Social Development, Gender Affairs Division in the Nevis Island Administration (NIA).

“I want to say to all of you who are charged with breaking the silence, stopping child sexual abuse, I want us to commit ourselves to the task. It is not a difficult task it is an easy task. All it requires is to get up and if you know, say what you know. Say that you know and let the law take its course but before that, let us also become counsellors for our children good parents, good guides, good advisors and let us treat our children with the respect which they deserve as our precious gifts from God, knowing that if we have trained them well, if we give them proper guidance and if all of us in society – father, mother, uncles or cousins … if all of us assume that responsibility as a community, then we will not be talking henceforth on child abuse or gender-based abuse in our country,” he said.

The Premier urged persons to think of the long term effects child sexual abuse had on children, among them the social disruptions, disruptive behaviour and the damage suffered by the community as a result. He noted that children were a sacred right and responsibility which should be taken seriously. 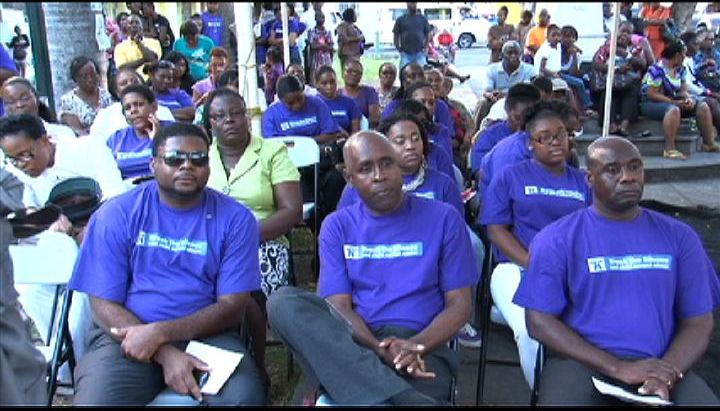 Meantime, Mr. Amory described the rally which was attended by the US AmbassadorHis ExcellenceLarry Palmer, CARIWA President Ms. Marilyn Rice-Bowen and Regional Coordinator for UNICEF Ms. Khin Sandi-Lwin, as a public demonstration of the desire to eradicate the scourge of child sexual and gender-based abuse because in any language or society the abuse of anyone, especially children, was something that should not be condoned.

He stated that children should be protected as God’s gift to mankind and they should enjoy their childhood without the disruption and the despicable invasion of their bodies, by persons who, clearly,had no understanding and who, in his opinion, were criminally minded.

“I make no apology for that strong statement because what happens when a child is abused is an infraction of the law it is a criminal offence and is punishable with harsh terms of sentence,” he said.

The Premier said as the NIA demonstrated to the world the need for the island’s people to break their silence on what he termed a “despicable problem” which over the years had created untold problems for the society. Mr. Amory noted that there was need to recognise that while it took a community to protect a child the focus had to be on every individual child.

He registered disgust for persons, who perpetrated crimes against children, in particular child sexual abuse, and spoke to the tendency for the act to be swept away in an effort to shy away from the stigma attached to victims.

“I have great disregard and no respect whatsoever for any man or any woman who abuses a child. I am aware that we have had instances in which persons who have been accused of child abuse have been pardoned in the community.

“I am not saying in the Court but in the community because parents, grandparents sometimes, have believed that there was stigma attached if their gift, their precious child, was molested, was inappropriately touched, was sexually abused and they thought that the embarrassment of making that incident public was too much for them to bear,” he said.

However, to those persons who shared that view Mr. Amory said the time had come for a change in mindset and that time is now.

“I am here today to enlist the energies, to enlist the commitment of every adult in this community of Nevis and wherever else this message will be heard that we have a duty, we have a sacred duty, a sacred right and responsibility to ensure that anyone who engages of sexual abuse of our children that he or she has no succour, that he or she has no room, no protection, no cover-up but will be dealt with justice,with the full force of the law,” he said.