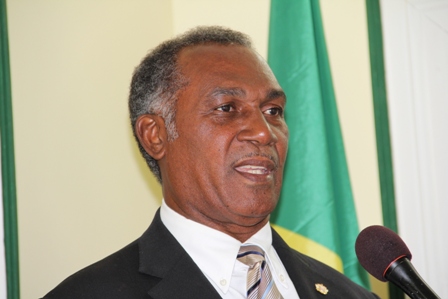 Premier of Nevis and member of the Federal Parliament Hon. Vance Amory

NIA CHARLESTOWN NEVIS (February 28, 2013) — Premier of Nevis Hon Vance Amory, said the High Court’s decision to strike down the appointment of  fourth Senator in the Federal Assembly and Attorney General of St. Kitts and Nevis Jason Hamilton was correct and sent a clear message to anyone desirous of disregarding the Constitution.

Mr. Amory who is also a member of the Federal Parliament commented when he spoke to the Department of Information on February 28th, 2013, after Justice John Benjamin Q.C’s summary was read in the Basseterre High Court.

“In this case the Opposition felt – not only the Opposition – I think the majority of people in St. Kitts and Nevis felt that that swearing in of Mr. Jason Hamilton as a Senator and Attorney General in the House, so that he could vote to have an effect, to have the Bill passed was unconstitutional; it was illegal.

“Therefore the decision which the judge has made is the correct one in our opinion and I hope it sends a very clear message to those who want to disobey the Constitution that the Courts are prepared to rule in accordance with the provisions of the Constitution and not to satisfy individuals,” he said.

“In my mind there was never any doubt that the actions taken in the House of Assembly a couple of weeks ago was clearly out of the rules prescribed by the House itself but also in defiance of the Constitution and that the appointment or the oath taken by Mr. Jason Hamilton ought not to have been administered and that the House ought to have continued as it had been adjourned when we were discussing the Increase of Senators Bill the time before the House had met,” he explained.

The Premier noted that it was unfortunate that simple matter, in his opinion, had to be settled through the Court. However, he contended that the Court was there to settle differences.

“That is what the court is there for. If there are matters in which there is conflict of interest between the State and its citizens [and] conflict between citizens and citizens. The court is the place to have those matters addressed and settled,” he said.