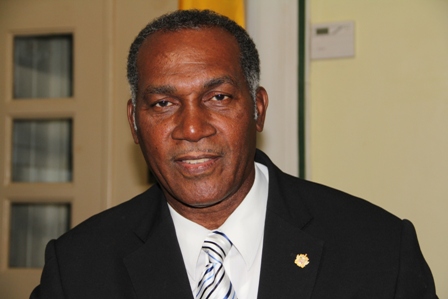 The Premier, who took over the Head of the NIA after the January 22nd local elections, charged the outgoing Administration with excessive expenditure which they blamed on external forces. He was at the time delivering a television and radio broadcast on the state of the economic affairs of Nevis on February 1st, 2013.

“The debt of the Island Administration has more than doubled in the last six and a half years. This excessive debt has led to the increase of the taxes on the people to pay those excess expenditure without due regard of the economic stability of the country.

“At the end of 2012, the debt of the Nevis Administration is calculated at EC$406,000,000 almost double what it was in 2006 when the Concerned Citizens Movement was ousted from Government. This is no witch hunt. This is a report of the preliminary findings which bear out the charge of concern which your CCM party has been making over the years that the NRP Party while in government was inept and badly mismanaged the affairs of the people of Nevis,” he said.

Mr. Amory added that the Administration also faced the prospect of a law suit by the principals of UTICO and a settlement with West Indies Power Nevis over the geothermal project. However, he added that he will report on the status of those matters as the new Administration sought to resolve them.

Notwithstanding, the Premier and Minister of Finance stated he believed that the decisions they had already taken would be beneficial.

“The decisions we have made to reduce expenditure on Boards, to reduce the number of contracts for persons who have retired and have been rehired at higher salaries than their outgoing post, that we can see some immediate, if small positive upturn in the finances of the Nevis Island Administration.

“I have indicated as I did at the inauguration that all ministers of the CCM Administration will take a 10 percent cut in salary. This is calculated to provide a savings to the Administration of approximately $70,000 per annum. This amount will be earmarked to provide much needed medicines for the health services,” he said.

Mr. Amory further stated that sometime this week he would meet with the Administration’s bankers to make arrangements for financing its current account and to give the assurance that the CCM Government would manage the affairs of the people of Nevis in a more fiscally prudent manner. Therefore, he had already asked the Financial Secretary and the Treasurer to prepare proposals for presentation to the bankers.

According to Mr. Amory, plans also included formal approaches to at least two friendly countries and international financial institutions to request of them, where possible, soft loans to enable the Administration to provide some expenditure on Capital Projects in the near future.

The Premier noted it was the intention of the Administration to also approach the Airlines which provided service to Nevis to seek increased traffic flow into the island in particular to facilitate the island’s people who travelled as visitors or residents.

Also the Administration planned to approach prospective investors among them the principals of Newfound.

“I intend also to approach the principals of Newfound to reactivate the development at Pinneys Estate to see how quickly we can have the construction of the hotel and villas as your former CCM Government had negotiated in 2006.

“I have already had meetings with two entities indicating an interest in investing in Nevis and we shall pursue these efforts with alacrity,” he said.

Mr. Amory said though the road ahead would be hard and long and the challenge would be great he was confident that the CCM party in Government would little by little, provide a way out of the island’s economic morass.

“I am about moving this country forward to benefit the people and to secure a future for our posterity and children,” he said.