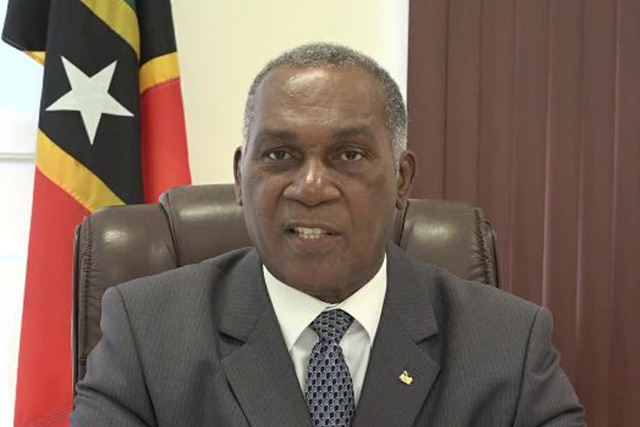 Hon. Vance Amory, Premier of Nevis and Minister of Education in the Nevis Island Administration speaking on the overall results for the 2017 overseas examinations at his Pinneys Estate office on September 01, 2017

NIA CHARLESTOWN NEVIS (September 11, 2017) — The following is an address delivered by Premier of Nevis and Minister of Education Hon. Vance Amory dated September 01, 2017, on the overall results for the 2017 overseas examinations.

The CCSLC examinations overall saw 318 student entries out of which 293 students wrote the examinations and 251 passed, giving us an 88 percent pass rate. This is an increase of 6 percent over last year.

At the Nevis Sixth Form, 125 students sat the CAPE examinations. The CAPE Unit entries this year were 606, of which 566 Units were written with 473 Unit passed, with an average of 84 percent pass rate. The pass rate for this year CAPE examinations remained the same as last year.

The CSEC examinations had 1,563 subject entries of which 1,498 subjects were actually written. There were 1,207 passes, giving Nevis an 81 percent pass rate this year. Just one percent increase over last year’s results. (The private secondary school and private candidates are included in these CSEC statistics)

The Sixth Form pass rate improved from 81 percent to 84 percent. The two government schools combined, attained an 86 percent pass rate. The Gingerland Secondary had a pass rate of 89 percent and the Charlestown Secondary School, a pass rate of 83 percent.

The number of students who wrote the exams for the Charlestown Secondary School CSEC examinations, was 141 and they wrote 922 subject areas, with 768 subject passes for an 83 percent pass rate.

The Gingerland Secondary School, entered 50 students who wrote 284 subjects with a number of 253 passes, giving a percentage pass rate of 89 percent.

The Nevis International Secondary School, again entered a slight increase in the number of students writing the CSEC examinations as well as a number of subjects written. Twelve students entered and 51 subjects were written. The pass rate this year was 75 percent.

There were 190 Private Candidates registered to write the CSEC examinations this year and the pass rate for that area was 61 percent.

Also this year, 11 candidates registered to write the CAPE Examinations and returned an 84 percent pass rate.

At the Nevis Sixth Form, the most individual Units attempted over a two-year period was 12, an increase of 2 over the last period. The outstanding candidates for the 1st year and 2nd year are as follows:

We now look at the CSEC for the high schools in Nevis.

The most individual subjects attempted by the students at the Nevis International Secondary School was 8 and the outstanding candidates were as follows: Tarana Kacker, 8 subjects passed, 8 Grade 1’s. Shamona Wodoe, 7 subjects passed, 2 Grade 1’s.

I now turn to the subjects which recorded the highest percentage or 100 percent passes.

CAPE Integrated Maths that was introduced as a compulsory Unit two years ago, still poses a challenge for the students and in this subject area at CAPE, the pas rate this year remains at 51 percent.

Tourism, which was introduced as a CAPE Unit for the first time this year had 100 percent passes. Commendations go out to the instructor Mr. John Hanley, the Acting Permanent Secretary in the Ministry of Tourism, who worked hard in pointing the students in the right direction and also to the students, for applying themselves in this new subject area.

Quite a number of students saw changes made this school year with some of the subject areas. CAPE Paper 1 Examinations were written online for the first time. Computers had to be in place to accommodate this transition.

The Nevis Island Administration and the Information Technology Division of the administration, were instrumental in ensuring that the computers were acquired on time and installed and that they were ready for the students who were sitting exams using the computer for the first time in this examination.

Clearly, there were a few challenges but everything fell into place because of the support of the Nevis IT Division and we say thank you to them. We also say thank you to the Nevis Electricity Company Limited (NEVLEC) because during the course of the examinations, even though they were suffering with some technical difficulties, there was electricity for the students to complete their examinations.

The changes in those syllabus names, is to indicate the emphasis which is now being placed in the case of Clothing and Textiles, on enabling our students to engage in design and things like that.

In Food and Nutrition, adding health as a focus point, also is indicative of the interest which our people need to pay in terms of their health and this is a focus which is welcome.

I look at the 100 percent passes for subjects at the Charlestown Secondary School and these subjects which returned 100 passes are Agricultural Science (double award), Biology, Chemistry, French, Integrated Science, Music, Physical Education and Sport and Food Nutrition and Health.

The subject that returned 10 passes at the Nevis International Secondary School were Geography, Information Technology, Spanish, Electronic Document Preparation and Management and Human and Social Biology.

I commend the students and the teachers who have enabled our results this year but also for the work they did in preparing our children for the word of work and also for those who want to go on to education at the tertiary level at university or at other technical institutes.

We are again appealing to the students and the parents, to be vigilante when examination time comes around. I say this because too many subjects are returning with absences and students are moaning that they got the dates wrong or the times mixed up.

Once the examination date is passed and the student has missed that examination, that student will be recorded as being absent and there is no refund to the parents or the students having paid their fees for these examinations.

This year, at the government secondary schools, there were 38 absences for the CSEC examinations and 40 absences at the Sixth Form level.

The Ministry of Education have highlighted the outstanding performance of Mr. Cheslyn Maloney, who while attending the Nevis Sixth Form, wrote and passed 12 CAPE Units with 7 Grade I’s.

I want, however, to look at a couple of challenges which we have to address in the upcoming school year. For me, we need to have a closer look at the performance of our students in English A, that is, what is regularly known as English Language.

In the Gingerland Secondary School, for English A, 50 students registered to do the CSEC examinations, of that, 36 sat the English A subject and 25 passed for a pass rate of 69 percent. In Mathematics, 30 students sat, with a number passing of 23, giving a pass rate of 77 percent.

At the Nevis International Secondary School, 5 students out of 9 passed the English A examinations for a 56 percent pass rate and in Mathematics, 2 out of 3 for a pass rate of 67 percent.

I wish to note, that these two subject areas are critical for our students advancing either in employment or at university because English A, is really the base and core subject for communication in the language English and Mathematics, is to develop in them their numeracy skills. We have to pay special attention in the new year to these two areas because the pass rate level is not satisfactory for us.

The Nevis Island Administration, will continue to invest in the provision of education for all our children, with the expectation, that our children will take the challenge and respond to the call to build their country.

The mantra, “Investing in Education to Empower Our Nation” is still valid and will continue to be a mantra for us in the years ahead.

I now extend all best wishes to all of our students who will be sitting the exams in the new year of school 2017-2018. While I commend those who have done well, we have to look forward to the future.

I say to those who did not do well in the examination, they have opportunities to rewrite the subjects which they have failed and I wish them well as they consider doing that.

For those who are going on to the world of work, I trust that you can find employment and that you will see that the education which you received here in our schools in Nevis, is adequate to prepare for the world of work and that you should do your best to help to continue with the development of your country.