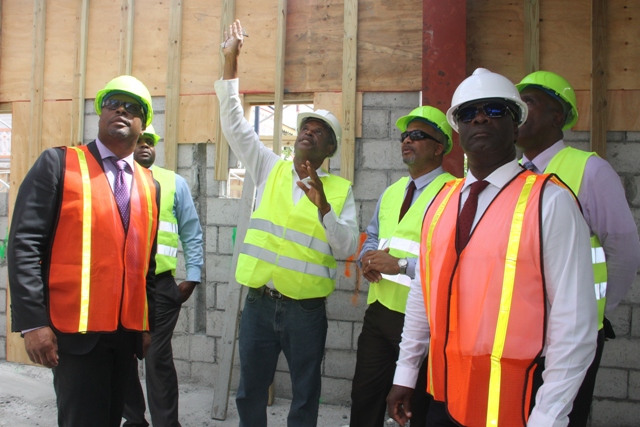 (middle) Mr. Collin Walters, Architect and Project Manager of the Treasury Reconstruction Project pointing out aspects of the project to members of the Nevis Island Administration Cabinet (to his left) Hon. Mark Brantley, Premier of Nevis; and, Hon. Troy Liburd (to the right) Hon. Spencer Brand, Mr. Stedmond Tross, Cabinet Secretary and Hon. Alexis Jeffers, Deputy Premier on a tour of the Treasury Reconstruction Project in Charlestown on March 07, 2018

Mr. Brantley was at the time leading Cabinet members and Mr. Colin Dore, Permanent Secretary in the Ministry of Finance, on a tour of the construction site on March 07, 2018, to assess progress on the 18-month project funded by the Sugar Industry Diversification Fund (SIDF). Construction commenced in October 2017.

“I am very happy to see what I have seen here today… we look forward to this project being completed in the next 12 months so that by next year we would hope…we could move all our services back to where they were prior to, of course, this terrible fire that, we had, burn this building down,” he said.

The Premier, who is also the Minister of Finance in the Nevis Island Administration (NIA) described the project as an important one for the government. He said they are committed to rebuilding the structure to provide a central point for the provision of services offered by the Inland Revenue and Information Technology Departments.

Mr. Brantley noted that on completion it would be a structure that would serve Nevis for the next 40 years.

“This building is quite impressive in terms of its size and its scope. We have heard that it will provide for the various services. We have elevators that are in this building.

“We are going to have handicap access which, I think, many people living with disabilities have complained that many of our public buildings don’t provide for them. So that provision is made and I think we are forward-looking in terms of what we are seeking to accomplish here,” he said.

The Premier used the opportunity to thank the SIDF and its Councils for their invaluable assistance with substantial financing.

He also thanked local contractor LEFCO Equipment and Construction Company and encouraged them to continue to provide the quality of work they have become famous for.

Meantime, Mr Dore expressed hope that the Inland Revenue and IT Departments would reoccupy the premises by mid-2019.

Mr. Dore reiterated that when completed the building would have the same acoustic look as buildings in Charlestown.

“The bottom of this building traditionally was stone-clad and it is the intention on the finished product to have the bottom portion stone-clad as well. The top portion would carry the lapboard as we have other surrounding buildings in and around Charlestown,” he said.

In terms of the building’s height, the Permanent Secretary assured that beyond the steel frame already erected, the roof would not be much taller.

“What we are seeing in terms of the steel frame structure is the final height of the building and it is not substantially higher than any of the other buildings in Charlestown. There would be a little section of roof on the top which is about six feet high…

“So I want to assure the public that everything will be done to ensure the building carries the same architectural look as all the other buildings in and around Charlestown,” he said.