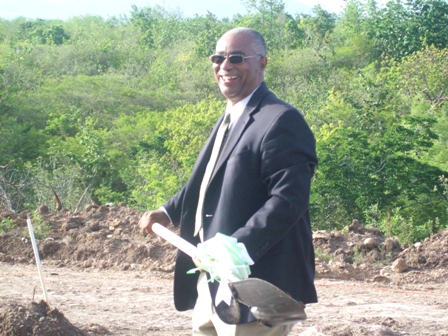 Premier of Nevis Hon. Joseph Parry, described Live Nevis Development Ltd. situated at Clifton Estate, as a very desirable area for villa development and a significant investment on the island of Nevis.

When he delivered an address at the groundbreaking ceremony of the Sunset Ridge project on August 23, 2008, Premier Parry said the investment represented confidence in the Nevis Reformation Party (NRP), the people and the economy of Nevis.

“I am satisfied that the people of Nevis would not let you down. They have a great reputation of being friendly, warm and hard working,” the Premier told the investors.

He reminded the gathering that the first established five-diamond hotel in the Caribbean, the Four Seasons Resort, was built in Nevis, under the NRP in 1991; and had, within two years later had achieved the five diamond status.

Mr. Parry also pointed out that even though some parts of the Caribbean were suffering from the effects and impact of the recession in Europe and America, there was still five percent of the Caribbean, including Nevis that had remained competitive worldwide. “I am satisfied that you will do well here on this island,” he told the investors.

Hon. Joseph Parry speaks with s Live Nevis investor, Mr. Phill Clifford
During the ceremony, the Premier outlined some of the achievements of the NRP-led Nevis Island Administration (NIA) within the last two years which included the new roads, improvements to the water system; and the exploration of geothermal energy on Nevis which he said will bring cheaper, renewable energy to the residents of the island.

A number of new investments were expected to come to the island which Premier Parry said he would welcome. 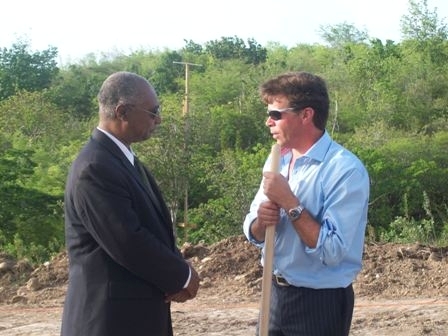 “As we move into the New Year more and more projects will materialise on this island, which will change the face of Nevis,” said Premier Parry. “We have said as a government that we intend to create a revolution; and that we will,” he mused.  “Our intention to change the island is to the benefit of investors and all the people of Nevis and I have always said that if the country moves forward, the people must move forward as well.”

Meantime, during the ceremony, Live Nevis Development Ltd. Made an EC$5,000 contribution to Deputy Premier, Hon. Hensley Daniel for a clean up contest during the  Independence anniversary celebrations and EC$500 to Mrs. Cherrill Field on behalf of the Nevis Girl Guides.

“I say safely, that we are happy with the relationship that LiveNevis Ltd. has garnered with the local people, local sports and the upcoming 25th Independence Anniversary activities,” said Premier Parry.

The first phase of the Sunset Ridge project will see the completion of 14 villas. They would be available for purchase as residential units or placed for rental with the Live Nevis Developments Rental Company to maximize the investment, while it maintained complete control of the desired terms of use.