The HIV/AIDS Coordinating Unit in the Ministry of Health on Nevis, received a US$3,000 donation from a corporate citizen, to help fund public education about the disease on the island.

Manager of Hurricane Hill Bungalows Ms. Kathryn Wyatt presented the cheque on behalf of the owners Althea and Bob Turner, and the Jonty Thomas Fund, to HIV/AIDS Education Prevention Officer on Nevis Mrs. Nadine Carty Caines. The presentation took place on August 26, 2008, on the Island Main Road at the foot of the Pinneys by-pass road.

“On behalf of Caribbean Cove Bungalows and the Jonty Thomas Fund we would like to donate these sign to you and to the HIV/AIDS Foundation and hope the moneys will be put to other good uses,” Ms. Wyatt said.

The Hurricane Cove Bungalow Manager also explained the reason behind the Turners decision
The first billboard in Memory of Jonty Thomas which reads “Consider yourself positive until you test negative” It is erected on the outskirts of Charlestown along the Island Main Road, at the foot of the Pinneys by-pass road
to contribute to the fight against HIV/AIDS on Nevis. 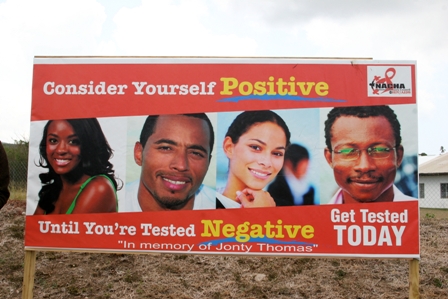 “Althea Turner, she and her husband own Hurricane Cove Bungalows. Her brother was tested and diagnosed in 1982 HIV positive and she has been very vocal in HIV/AIDS in Anguilla where they permanently live, as well as when they travel to the mainland in the States. Her brother does do a lot of traveling for HIV/AIDS throughout the country,” she said.

In response Mrs. Carty Caines thanked the Turners for their invaluable donation and noted the areas in which the money would be utilized.

“We [the Unit] have decided that [the] money [would be used] to get two billboards and the remaining funds would go towards establishing an HIV website for St. Kitts and Nevis,  so that persons can get access to information or they can also send enquiries concerning any questions they have to the website,” she said.

Mrs. Caines further explained that the website would provide a source of comfort to the public with the knowledge that they could have access to answers to any questions or information at anytime once they had access to the internet. She said the high tech tool would also help to increase confidentiality.

The HIV/AIDS Education Prevention Officer also used the opportunity to acknowledge the memory of Mr. Jonty Thomas who the first billboard, erected at the foot of the Pinneys by-pass road, was dedicated to. “It says ‘Consider yourself positive until you test negative’. So we encourage persons to get tested,” she said.