Director of the Development Projects Foundation Incorporated on Nevis Mrs. Myrthlyn Parry, handed out five Dell Vostro 200 computers to four sectors on the island, to enhance their capabilities. The donation came through a collective donation valued at US$2,500, came from a number of civil minded persons on the island to fund the project.

Mrs. Parry explained that the Foundation was incorporated in early 2008 to access funding for developmental projects on Nevis.

“We cover government departments, non
Director of the Library services on Nevis Mrs. Sonita Daniel (r) receives computer from Director of the Development Projects Foundation Incorporated on Nevis Mrs. Myrthlyn Parry
government agencies, community groups and so on. Anybody who has a project that you would like us to help you get funding for, you can contact us.

“We are here to hand over five computers and we know that this does not even begin to scratch the surface but at least it’s a start because some departments, I know, you need more than one or two computers but at least, if we start the journey somewhere, there is a strong possibility we will be able to make great strides on the road to achieving your needs,” she said.

The Royal St. Christopher and Nevis Police Force Nevis Division received two, while the Ministry of Health’s Health Education Unit, the Library Services and the Ministry of Sports received one computer each. 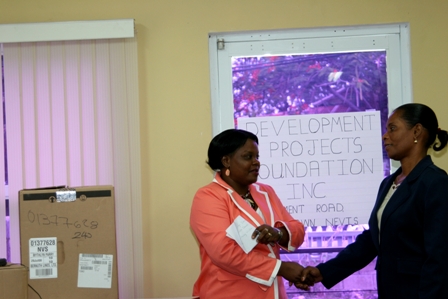 Superintendent Samuel Seabrookes Head of the Nevis Police Division expressed his gratitude for the equipment and cited their usefulness in the
Development Projects Foundation Incorporated Director Mrs. Myrthlyn Parry hands over a computer to Health Educator Mrs. Shirley Wilkes
fight against crime.

“We know we are living in an age of technology and the computers would be a very useful tool to the police. We do a lot of research to help us to solve crimes and to keep a data base. I thank the Basic Needs Trust Fund for the initiative and their kind gesture. We would as much as possible to take care of this,” he said.

Mrs. Sonita Daniel Director of the Library Service, on receipt of the computer noted that the equipment would be used at a school library at the Ivor Walters Primary School and would be used to advance the delivery of library services there. She said the libraries were an important tool at the primary school level.

“No longer are school libraries just for books, they have become school libraries.  They are centers with computer resources that would enable our children to engage meaningfully with a wide
Mr. Franklyn Daniel Venue Supervisor in the Ministry of Sports receives computer from Development Projects Foundation Incorporated Director Mrs. Myrthlyn Parry.
variety of information. The school library is the centre of the support of the use of mechanic information resources, not just in the centre but also in the classroom and throughout the curriculum. 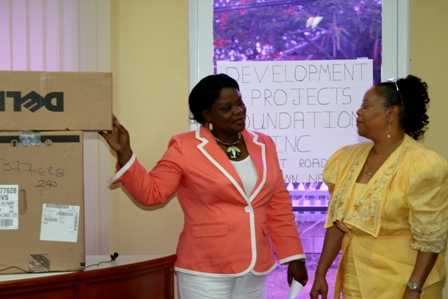 One of the five Dell Vostro 200 computers handed out by the Development Projects Foundation Incorporated on Nevis.
Health Educator Mrs. Shirley Wilkes explained that the new computer for the Unit would be used to develop the resource centre there and to make health information more accessible to the public.

“The computer is one of the many that we had on the list as we seek to develop our resource centre in terms of improving our health services on Nevis.

“Right now there are a number of pieces of equipment that we are sourcing so that the public can come in and access health information, all health data will be available on computers and so persons would not feel that they do not know anything about health because the sources are not there,” she said.

Mr. Franklyn Daniel Venue Supervisor in the Ministry of Sports received the computer and registered the Ministry’s gratitude for the equipment and gave the assurance that it would be well utilised.

Following the ceremony, Mrs. Parry told the Department of Information that she had public praise for the Government of Germany that had donated EC$51, 138.32 to fund two more of the Foundation’s projects and also Mr. Barry Wilson of Jessup. 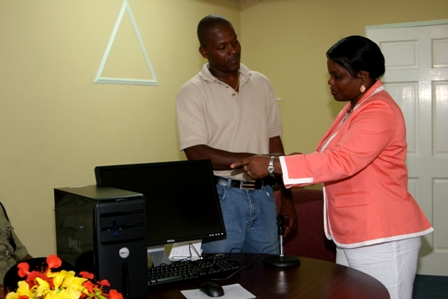 “The money was donated to finance two projects, one at the St. James Primary School and the other undertaken by the Dyslexia Association of Nevis (DAN).

“The Development Projects Foundation Inc. would also like to publicly acknowledge the receipt of US$1,000 from Mr. Barry Wilson of Jessups Estate. The money will go towards development projects on Nevis,” she said.

Mrs. Parry also extended thanks to Bernuth Lines of Miami, Florida and its local agent Mr. Anthony Parris of Tony’s Enterprises Ltd. for their assistance with shipping the computers free of cost to Nevis and delivery to the Foundation’s office; to Ms. Noreen Meguid for purchasing the equipment and to the Information Technology Department for configuring the computers. 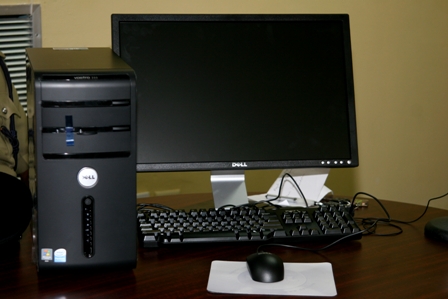