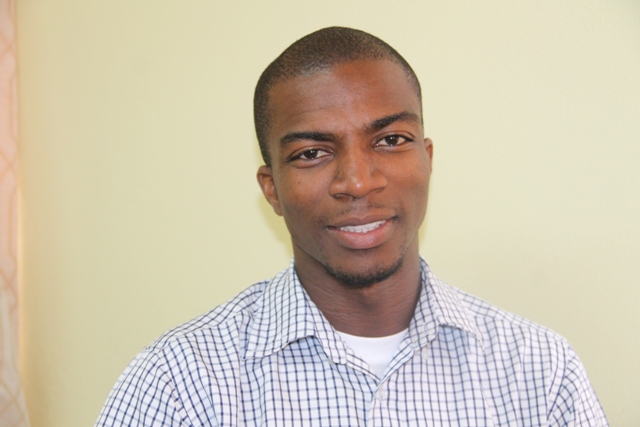 Joshua Browne, Coordinator of the Literary and Debating Society at the Nevis Sixth Form College
NIA CHARLESTOWN NEVIS (February 13, 2017) — The Literary and Debating Society of the Nevis Sixth Form College, will host the 2017 Leeward Islands Debating Competition (LIDC). The event which is in its 45th year, commences on February 23 to 26, nightly from 6:30 p.m. at the Nevis Performing Arts Centre.
The LIDC was founded in 1972 by George Irish of Montserrat. The event which began with three participating islands of Montserrat, St. Kitts and Antigua has evolved into an annual event.
For the competition’s 2017 edition, seven islands will participate.  They are  St. Kitts, Montserrat, Antigua, Anguilla, St. Maarten and the British Virgin Islands and host island Nevis.
The debaters are expected to be on island by February 22, one day ahead of the contest. They are expected to attend a welcome cocktail hosted by Premier of Nevis and Minister of Education Hon. Amory.
On the first night will be Debate 1 between St. Kitts and St. Maarten. The topic will be “The high cost of youth unemployment relief programmes outweighs the benefits”.
Debate 2 between Nevis and Montserrat will take place on the second day. The topic will be “The global rise in anti-immigration sentiments is justified”.
Also on the second night, Debate number 3 takes place with the British Virgin Islands and Anguilla. The topic will be “Caribbean Educational practices lag far behind other regions”.
On the third night, the winner of Debate 1 will take on Antigua, the previous year’s winners, on the topic “Caribbean cybercrime legislation will lead to the suppression of free expression”.
Also on that night, the winner of Debate 2 will take on the winner of Debate 3. The topic will be “Lack of emphasis on the Arts will be detrimental to human development in the Caribbean”.
On the fourth night, the winner of Debate 4 will take on the winner of Debate 5 with the topic “The atrocity of our age is the billions of dollars spent on sports”.
Joshua Browne, Coordinator of the Literary and Debating Society says that although they have had challenges, plans are being put in place to ensure a successful event.
He noted that they have been planning since September and fundraising is ongoing.
“So far we have been raising funds and that has been going pretty good. We already have some sponsorship but we welcome as much support as we can get,” Browne said.